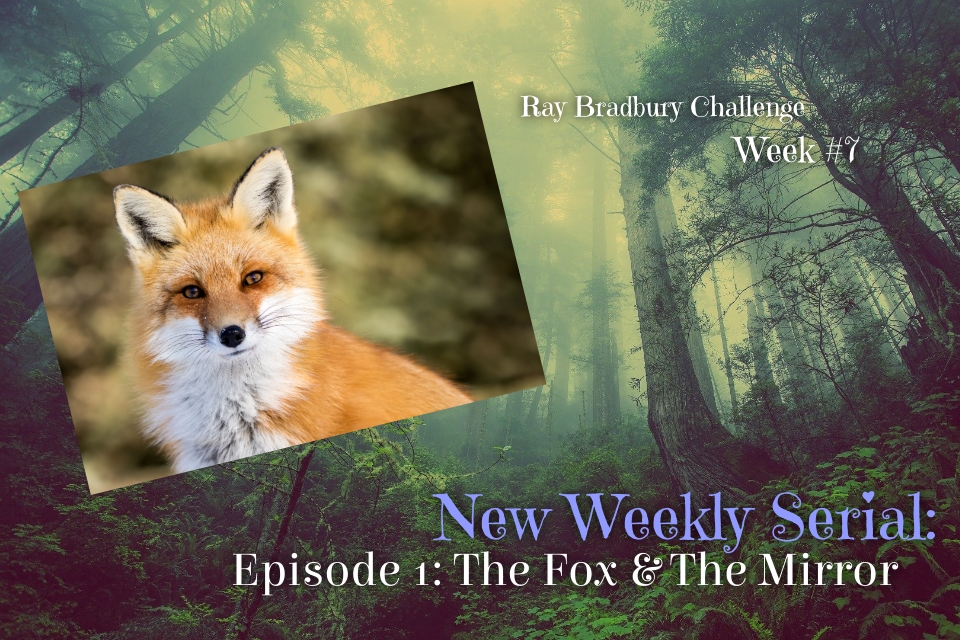 I'm going to up the ante on these weekly short stories. The last couple of weeks, they've been reading more like scenes from full novels, so I've decided to challenge myself and use the weekly writing prompt to compose my first web serial.

And I'm thinking of somehow tying in last week's challenge with this storyline I'm starting today. But we'll see. I'm totally winging this and making these up as I go along, so I can't guarantee the quality, but I will do my best to keep you coming back each week for more.

UPDATE: I've given this storyline a working title – Cleris in Evanterra. Not sure that title will stick, but I don't know what this story is about yet, so we'll be flexible and I'll probably re-title it later. But I thought the web serial title would help us keep track of the two storylines I plan on pursuing – this and The Stone of Fate from last week's short story A Twist of Fate.

“The fox swished its tail in front of me, begging me to follow.”

The Fox & The Mirror

My lids fluttered against the brightness. A canopy of trees framed the clouds scudding across the sky. Wind whispered through the branches like a sigh.

Where the hell am I?

Sitting upright, I pressed my palm to my pounding head, then probed my fingers across my scalp. I discovered the knot at the back of my skull and winced. My neck stiff, I swerved my gaze around the forest. Dark, autumn, vaguely familiar.

The trip to London was real. The tour through the Harry Potter museum was real, too. The whole reason I’d taken the trip to the UK was to see the relics of my childhood fantasy world related to the books I devoured dozens of times over the decades. And the costume ball…surreal.

I gazed down at my body and frowned. My once-maroon gown was tattered and littered with dry bits of leaves and twigs, glitter still sparkling on the shredded tulle. My beautiful shoes, gone.

The condition of my costume was testimony to the tumble I’d taken through the mirror, but that’s the part that couldn’t be possible. And yet, here I was, exactly where I’d passed out the night before…when I followed…

I’d enjoyed drinks and rubbed elbows with the actors I adored, who played the characters I’d dreamt of being during my adolescence. And peering around a corner in the shadows of the museum was a fox with a monocle, no less.

It beckoned me with its tiny black paw. I thought it was some fantastical animatronic creature meant to be part of the entertainment, so I went after it. It led me through a maintenance door, down a hall and, just when I felt I was trespassing, it yapped and urged me with a wave.

I poked my head through the door where the fox disappeared. It stood before a large gilded mirror emitting a lavender-white light. The glass sparkled a purple, silver and black whirlpool, the beauty of it drawing me into its current.

The fox swished its tail in front of me, begging me to follow…and leapt through the mirror. Or portal. Or whatever it was. How could I ignore such a calling? So I leapt, too.

The throbbing in my skull reminded me I needed to figure out where I was and tend to basic needs. My stomach growled in agreement.

I staggered to my feet and froze, a rustling in the bushes ahead.

Cinnamon eyes blinked at me from the bush.

“You.” I straightened and crossed my arms. “You got me into this mess. Are you getting me out?”

The fox rose on its hind legs and peered at me through the monocle. It nodded its rust-brown head, but patted the air in front of it, as if to say, “Stay there.” In two pounces, it disappeared behind a large oak.

Pink light shimmered from behind the tree. A moment later, an elderly man dressed in black leathers and silver-white thick hair emerged with a grin on his handsome face. “My apologies for the disguise, but I couldn’t let anyone at the gathering see me.”

He smirked. “I’ve traveled a great distance to fetch you. Now, come along.” He turned to leave.

“Wait!” I carefully padded my tender feet over the dried leaves and twigs. “Ah. How is this—ooo—possible? Where are we? Ouch. What is going on?”

“Poor thing.” He guided me to sit on a boulder. “Let me get you something more comfortable.” The man reached into the satchel slung over his shoulder and, like Mary Poppins, pulled out things a bag that size had no business carrying—a pair of leather boots, socks, a set of leather armor, a satchel and a bow, arrows and quiver.

“Just a moment.” He touched the tip of his index finger to my forehead and a blue light flashed. “Now put those shoes on and go into the bushes to change.”

“What did you just do?” I rubbed my brow, where my skin tingled.

“Removed the memory charm. Give it a moment. In the meantime, get dressed.”

“Memory charm?” I dusted the bottoms of my feet and slipped them into the soft warm, knitted socks, and the shoes fit perfectly. “How is this possible?” I traipsed to the bushes and began undressing. “You said—”

I shook my head and shoved it through a thermal-type undershirt I’d found in the folded garments. The leathers were next, soft, worn and fit me like a glove. Putting them on, I almost felt…at home.

Although I thought I knew who I was, where I’d come from, what my life had been until this point, everything I knew faded to the edge consciousness as my real memories surged forward.

The heartache returned with a vengeance. I grabbed my bow and glared through the brush. There! The messenger of the villain who took everything I knew, everyone I loved. Nocking an arrow, I stepped from the cover of the bushes and drew the string until the fletch kissed my cheek.

Melchor held up his palms, fear widening his eyes. “No, please! Let me explain!”

I didn’t wait. I let the arrow fly. It brushed past Melchor’s white hair, silver cuttings floating on the drag of the arrow’s path. The projectile found its mark into the assassin’s heart. His invisibility spell died with him as he dropped from the oak branch where he’d perched, slamming to the forest floor.

Melchor panted, his hand at his throat, saucerous eyes trained on the dead man beside him. “You… Th-thank you.”

I nocked another arrow and pointed it at Melchor’s head. “I just chose the lesser of the two evils. But you’ll be lying next to him if you don’t start talking.”

“Cleris, I understand why you’re so cross with me, but let me explain on the way. We have a long way to go and we are running out of time.”

I tugged the bow string, wanting to let it loose, wanting to see it split his head. The arrowhead shuddered as I held back the sobs.

He was a wizard. With a snap of his fingers, he could suck the air from my lungs or boil my blood. And yet he pleaded with me. He wasn’t even using his magicka to subdue me. He was giving me a choice.

I lowered my weapon.

“Don’t thank me now, old man. The only reason I’m letting you live is because you still have answers I need.” I returned the arrow to my quiver and shouldered my bow. “Lead the way.”

I have no clue what's going to happen next, what Melchor did to piss Cleris off so much, or who sent the assassin! Not to mention what this looming problem is where they're rushing off to.

If you'd like to get notified of these weekly shorts, be sure to join my VIP Club, where each Thursday you'll get a newsletter with this and more.