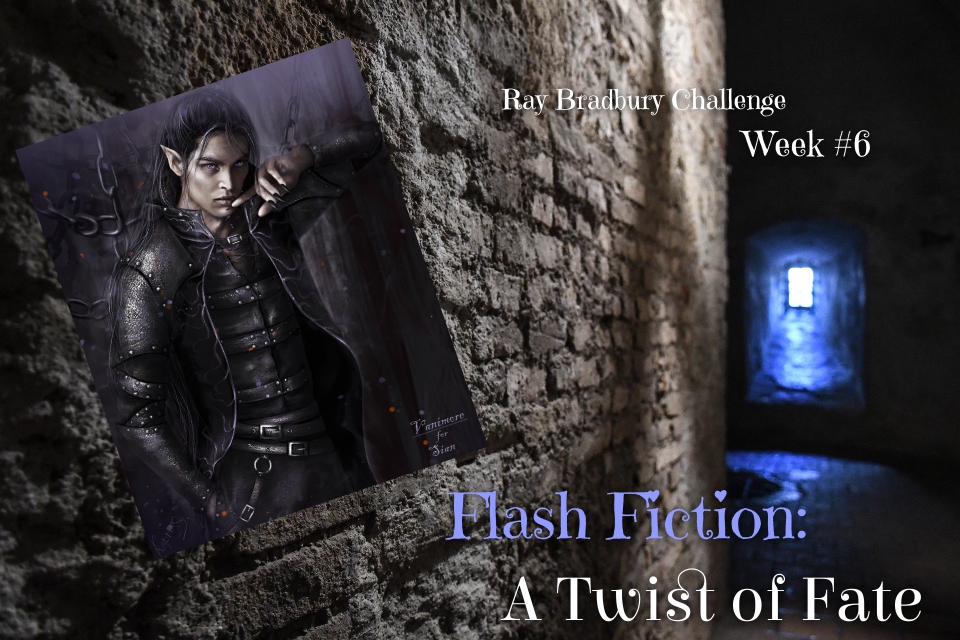 This is week 6 (6/52) of the Ray Bradbury Challenge and I went with a fantasy idea. I saw this prompt on Shauna Philp's Wednesday Writing Prompts…

I'm already late posting this and we still have plenty to do to get ready for the holiday weekend, so forgive me for the poor editing and it's longer than I usually post.

UPDATE: (7/9/2020) – I've just posted my Week #7 RBC and I mentioned that I would like to see this story – A Twist of Fate – continue and possibly intersect the story I started titled The Fox & The Mirror. So I've renamed the story below to be the first episode in the storyline for The Stone of Fate.

A Twist of Fate

Episode 1 of The Stone of Fate

Great. Now my pants are wet.

Faelar huffed and arranged some of the straw on the stone floor into a pile against the wall. Probably a little too late, he sat on the pile to prevent his trousers from getting any worse. Head leaning back against the limestone, he sighed. The musty air hung thick, punctuated by the occasional drip. He crinkled his nose.

The figure on the floor stirred.

A groan echoed around the chamber.

Faelar cocked his eyebrow, hands linked around his knees.

The human lifted his cheek off the wet floor and winced. “Ungh.” His hand pressed to the crown of his head. Blood crusted along his temple and down the dry side of his face.

“I wouldn’t get up too quickly, if I were you,” Faelar warned.

The human’s bleary eyes searched the dim space and landed on the elf. “What happened?”

Faelar shrugged. “They dumped you in here and left.”

“Where’s here?” He pushed to sitting and his fingers probed the wound on his scalp.

“Oh it’s a dungeon?” His eyes explored the stone chamber.

“What did you think it was? What other places would be dark and wet?”

“I guess you’ve been in more dungeons than I have.” The human smirked, despite his circumstances. “This is my first.”

The elf snorted. “Lucky you.”

The human’s jaw dropped. “That’s it? A dwarf saw you and put you in here just because you’re an elf?”

Faelar avoided his incredulous gaze and shrugged. “I may have poked around someplace I shouldn’t have.”

“Ah.” He smiled and used his wet sleeve to work the blood from his cheek. “My name’s Mace.”

The elf rolled his eyes. “Faelar.”

Faelar harrumphed. “And why are you here?”

“Same reason you are—poking around where I wasn’t wanted.”

“I’m a bit of a treasure seeker.” The human grunted as he stood. “Ugh.” He examined the sopping side of his garments and frowned.

Faelar’s ears twitched with interest, but he schooled the rest of his body to keep still. “And just what treasure were you seeking?”

Mace grinned and eyed the cell door before strolling over and peering through the bars. Rocking back and forth, her peered down the hall. Then he padded quietly to Faelar’s side and crouched. “I know it sounds crazy, but I was after the Stone of Fate.”

The elf scoffed, but tightened the grip around his knees. “First, that’s a mythical object that is probably more legend than truth. Second—”

“You need the map of Silveril just to find the key.” Mace nodded. “And then when you find the key, you still have to decipher the gate, which is in elvish. Then you have to traverse the labyrinth to find the chamber where the stone is kept.”

“You’re close, but you’re missing a few pieces.” This human was like all the other treasure seekers. He didn’t have all the facts.

Faelar chortled. “There always is. But no one has been able to find the map for centuries because the dwarves stole it. They claim not to know where it is, but I think they have it hidden. If you don’t have the map, you’re not finding the stone.” He knew that all too well.

The human grinned, glanced over his shoulder, and sat on the remaining cluster of straw beneath him. One more peek at the door, he removed his shoe and whispered, “You mean this map?” From under the sole of his footwear, the human pinched a folded piece of living parchment.

Faelar clenched his jaw to contain his excitement. He peered over the human’s shoulder at the cell door. No sign of movement, shadows or sounds. “If that is the map, how did you get it?”

“I told you. I was thrown in here for the same reason you were.” He raised an appraising eyebrow. “And judging by the excitement in your eyes…”

“…you were poking around for the same thing. Got caught in the archives, did you?” He tucked the map back into his shoe and checked over his shoulder. “I got to it before they got to me.”

“But you still got caught. So what good will it do you?”

He sighed. “You’re right.” But a sly smile turned up the corners of his mouth. “I’d wager, however, you’re on the same quest. I have the map. What do you have? Maybe we can find it together. We can both use the stone to change our fates.”

Faelar dropped his head back against the limestone wall and closed his eyes. “Even if I did have something, we’re still in this dungeon. Those doors are sealed with dwarven magic. We’re not getting out until a dwarf lets us out.”

Faelar gave the human a skeptical sideways glance. “I doubt that.”

“Let’s just say I did. What important piece am I missing?”

“Pieces.” Faelar lifted his head and leaned close. “Getting the map will only get you to the entrance of the labyrinth.”

“I know elvish, so I can decipher the gate.”

Faelar continued in elvish. “Not without the blood of Silveril.”

Mace frowned. “But he’s been dead for two thousand years,” he replied in elvish.

The elf smiled and kept to his native tongue. “And there you have it.”

“Wait.” Mace narrowed his eyes. “You wouldn’t be seeking the stone if you didn’t have a way around that.”

“Or knew someone who was a descendent of Silveril.” He grinned.

Mace released a breath of awe, his eyes wide.

“And you know the rest?”

Faelar tried to feign disinterest as his finger flapped toward his palm. “Let me see the map.”

Mace removed his shoe again and unfolded the shimmering parchment, but he held it against his chest, not handing it over.

Faelar pursed his lips but leaned closer, squinting at the diagram. “I need to touch the parchment to know if it’s real.”

Living parchment was just that—alive—and therefore never deteriorated over the years. Infused with elven magic and created from the white leaves of the Merellien forest, the parchment would only respond to the touch of an elf.

Faelar fingered the corner of the map. Waves of shimmering white light pulsed from his thumb and forefinger across the page, like ripples in a pond. His eyes followed the ripples…and they illuminated Silveril’s seal in the far corner.

Faelar’s breath caught in his throat. The human wasn’t as stupid as he thought. Or he was damned lucky.

“It’s real, isn’t it?” Mace’s elvish was impressive. A northern dialect, but he was fluent.

He folded the map and replaced it in his shoe once more. “And you’re the descendent of Silveril.”

Faelar decided Mace wasn’t lucky after all. He knew only the blood of Silveril would illuminate the seal. “We still have to get out of here.”

Mace rose to his feet and strolled to the door. “Hey! I found out what I needed to know. Let me out.”

“Yeah, yeah.” A dwarf stomped to the cell door and fished for the key on a ring of many. “I heard ye the first time.”

Mace shrugged at Faelar, who scrambled to his feet as the dwarf opened the door.

Faelar’s heart sank. They just needed his blood for the gate, and the lifelong quest of his heirloom heritage had been a waste if it ended under the axe of a dwarf chopping block.

The dwarf chuckled as he stalked toward the elf. “Ye did a grand job getting him tae talk. I’m surprised—”

The dwarf’s body exploded into a blast of blue flames and disintegrated into a pile of ash before he could cry out. His axe clanged to the stone floor.

Mace’s fingers clutched the air, suspended before him with blue flames flickering to azure tendrils of smoke. He grinned at Faelar. “I told you I had a way out.” He grabbed the axe and tossed it to Faelar. “Ready to get out of here?” he said in elvish.

Faelar looked at the dwarven weapon and glared at the human…but if this was his only way out, he’d take it and deal with Mace later. “Let’s go.”

The amazing male elf in the featured image this week is titled Vanimore created by a very talented artist on DeviantArt named Kaprris. PLEASE visit their page and give them some lovin'!!

Ooooo, this was a lot of fun to write and I imagine it fitting well in the world my husband and I created for a fantasy series I'll be writing in the future – Legends of Evanterra.

If you enjoyed it, please use the buttons below to share on social media. And if you're an author also doing the Ray Bradbury Challenge, please leave a link to YOUR weekly short story in the comments. I'd love to read it. Until next week!