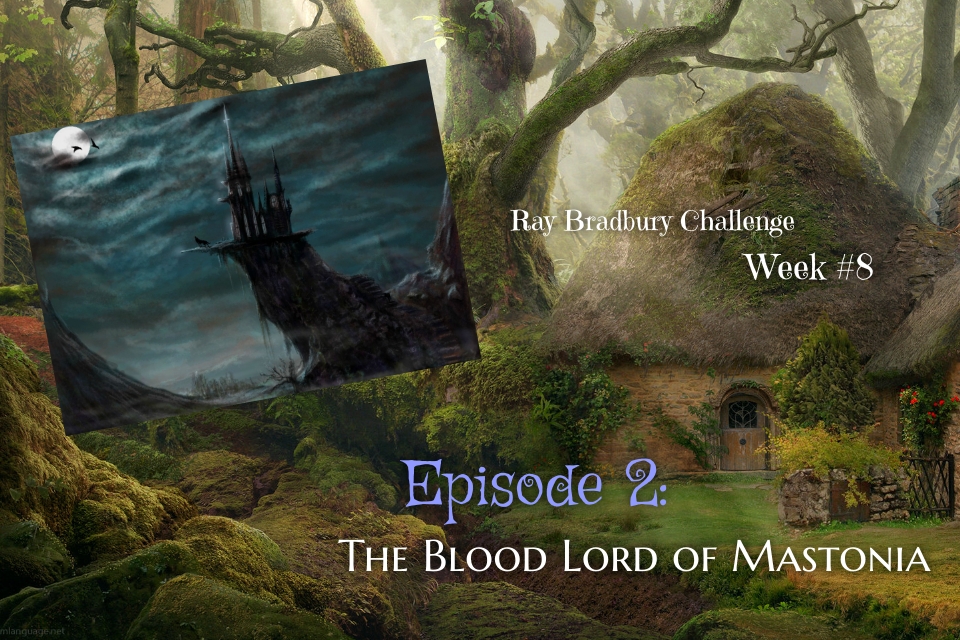 Sweet! This is turning out so much more fun than I had ever imagined. I really thought I'd be struggling every week and in agony over not having anything to post. But these stories are bursting.

Last week's Ray Bradbury Challenge was the first episode in a series of posts I'll be following through the fantasy world I've created named Evanterra. I'm still pulling from Shauna Philp's Wednesday Writing Prompts, and this one is the first on THIS PAGE:

“I’m not the person you thought I was.”

The Blood Lord of Mastonia

Why couldn’t I just drive my dagger into the base of his skull?

That was the all-encompassing thought plaguing my mind, spreading like a disease into my spirit like a virus with no cure, no vaccine. I stared at the back of Melchor’s head as he led the way through the forest, which was becoming more familiar to me with each step.

When Melchor had removed the memory charm, I was left with my brain scattered, trying to sort through all the memories repressed by the magic. Melchor was the one who’d sent me to Earth. He was the one who’d shoved me through the portal. The charm made me believe I’d been born to a mediocre life in a world without magic.

I opened my mouth to speak, but Melchor cut me off.

“Just a few more yards and we should see her cabin over that rise.”

“Why don’t we see if your memory has returned and you tell me who she is?” The wizard kept walking, his question rhetorical.

As promised, a cozy stone cottage nestled into the woods appeared as we topped the next rise. Thatched roof, flower boxes under the diamond-shaped lead-framed windows. Smoke swirled in thin tendrils out of the river-stone chimney. The pleasant aroma of baked goods traveled on the breeze and my mouth watered.

“Ah, smells like she’s anticipated our arrival.” Melchor grinned at me over his shoulder, but his smile faded as I glared at him. This man had a lot of explaining to do before he received my forgiveness.

He rapped on the wooden door and a short, stout woman with a beard stood on the threshold. “Yer just in time! Ye were able to find her, I hope?” The dwarf’s green eyes traveled past Melchor and she put her stubby fingers to her mouth. “Damia be praised. You’re a sight fer sore eyes, lassie.”

The memories of this woman rushed forth and I choked on the lump in my throat. “Brindle Trollhammer,” I managed with a brittle voice.

We threw our arms around each other and much of the tension I’d clung to during the journey to her cottage melted from my body like honey butter on hot bread, which I knew would be waiting for us at her table.

“Oh, m’sweet lamb!” She buried her face in my chest, and seemed as willing to stay in my arms as I was hers. “I wasnae sure I’d ever git to see ye again. But yer back now, thank th’ Gods.” She gazed up at me and patted my face with her soft hands. “Let me look at ye.” She shoved the hood from my head and scowled. “Och, Melchor! Take that bleedin’ spell off ’er ears. Ye dinnae have tae hide she’s an elf anymore.”

“Of course.” With a dismissing wave of his hand, my ears tingled.

I went to the mirror on the wall by the door. Good gravy, I was a mess. My hair disheveled and face still smudged from dirt when I’d tumbled through the portal. But my elvish ears stood proud and regal, three inches above my scraggly brown tresses. And my eyes sparkled violet. How I could have gazed at my reflection back on Earth, and not ached for such prominent features of my visage and heritage, spoke volumes about the strength in Melchor’s magic.

Between the memory charm and the change in my appearance—even my skin glowed with the magic of my blood—my true identity had been shrouded and now revealed to me with the last of the disguise gone.

Grief stopped my heart and weighed heavy upon my shoulders. Now, more than anything, I wished the memory charm was back in place. Now I knew why Melchor put the charm on me in the first place.

I faced the dwarf woman I remembered who had once been in my parent’s household, my nanny, my close friend. “Did my parents survive, Brindle? Did they escape?”

Tears spilled over her lashes and soaked into her downy beard. “I’m so sorry, lamb. They died in the Mastonian prison. Nicolai was relentless ’til the end, never giving up on findin’ ye, and yer parents never gave ye away.”

I stumbled to the dining chair and my bottom hit the wood hard, more memories resurfacing. On Earth, I was ignorant of monsters. They were the stuff of faery tales and nightmares. But vampires were real. Nicolai Moonfall, the Blackheart, the Blood Lord over the western warring kingdom of Mastonia. He was very real. It was his assassin I’d killed with my arrow hours before, but I should have let him kill me.

Nicolai had murdered our citizens to conquer our kingdom, the last defending force of the eastern realm. And now he was the murderer of my parents. And it was my fault.

“Princess.” Brindle only used my title when she reminded me of my station, of my duties.

“If you two think I’m fit to rule in place of my parents, you are sorely mistaken.” I glared at Melchor. “Life on Earth has made me soft.” Although that wasn’t the reason, it was the one I hid behind, even if for just a few minutes more to stave off the truth.

“If he hadnae sent ye there, lamb, you would ’ave died with yer parents.”

“Then that would have been my fate!”

“But the protection of Lourean would have died along with you and them.” Brindle took my hand in hers. “The only reason the magical wards on your kingdom are still standing is because you’re still alive.”

“But what good am I to them?” I withdrew my hand and paced, my heart breaking over Brindle’s incoming disappointment. However, I couldn’t hide anymore. Better to get it over with now.

“I’m not the person you thought I was.” I glowered at Melchor. “And I’m surprised you haven’t told her.”

“Tell me what, lamb?” Hands on her hips, she implored me with those big green eyes.

Could I bare to see them filled with hatred? With disgust? Whether it was now or later, it was inevitable.

I closed my eyes, a coward ’til the end. “I’m the one who betrayed my parents, Brindle. I’m the reason Nicolai took them hostage.”

Woo hoo! I had no idea the story was going to take that turn. I'm really interested in seeing where these characters lead us. I hope you enjoyed this week's episode. I'll be posting a new episode every Thursday, so subscribe to my VIP Club to be notified of each installment (if you're not a member of the VIP Club already).

Would you PLEASE click your favorite social media buttons below and help share this story? The more the merrier! And leave me a comment below with questions or comments. I try to answer them all and love to chat with my readers.