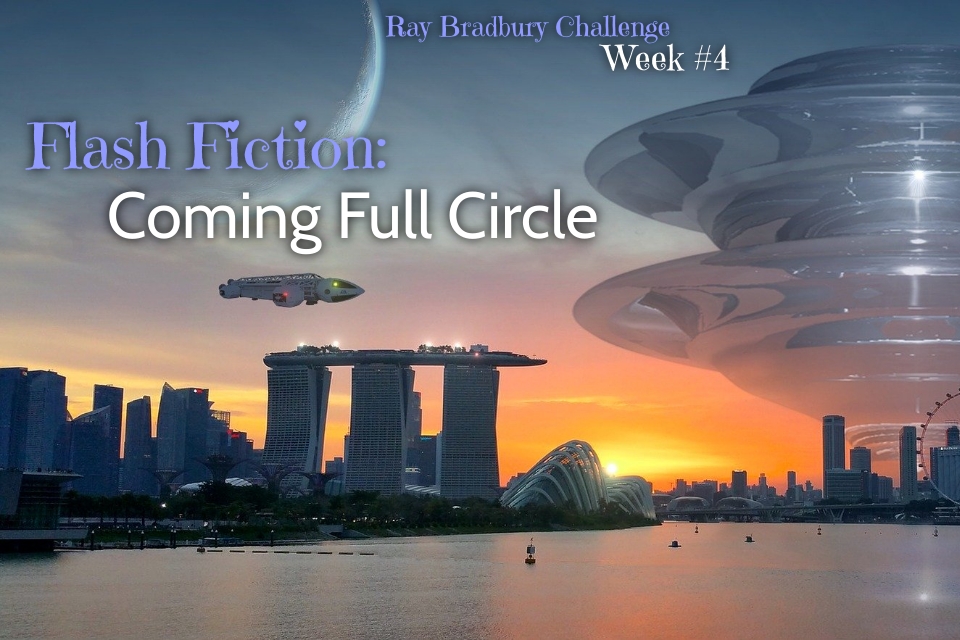 For those of you new to my site, CLICK HERE to read about the Ray Bradbury Challenge.

This week's short story is kinda like a scene out of a movie, and it certainly leaves you hanging. I grabbed another wonderful prompt from Shauna Philp's Wednesday Writing Prompts…

There we were. Sitting behind the overturned desk in my bedroom. The mirror on my wall had slid down to my bookcase and spider webbed, but my reflection was still plain enough. A shit-scared boy with wide blue eyes who was about to piss in his pants.

Another gunshot popped from the hallway. I covered my head with my arms.

“Hey.” The Stranger-Dude who came busting into my room, causing this chaos, nudged me. “Are you listening to me?”

I peeked between my forearms. “Uh-huh.”

“Good. Because we’re getting out of here and I need you to pay attention.” He pulled what resembled a gun from his plastic-looking jacket. In fact, now that I had a chance to get a look at his clothes, they all looked like some bizarre synthetic material I’d never seen before. “I know you don’t work well under pressure, but you’ll learn.”

I dropped my arms and frowned. “What do you mean I…? How do you know I don’t work well under pressure?”

He cocked the gun-like thing in his hands—and I say gun-like because it had the shape of a gun, but it was…purple and red and iridescent pink and…well, it looked he created a toy gun on a 3D printer.

Anyway, he cocks the darn thing and points it at the ceiling, like some spy from a futuristic espionage flick. “Just trust me and listen.” He grabs my face, like he’s going to make me say pudgy bunny, and pins me with his blue eyes. “We’re going to run for your bedroom wall right there.” He points at my poster of Darth Vader on the opposite side of my room. “And I don’t want you to stop.”

“Wha?” I shove his hand away from my face. “That’s your plan for getting us out of here? Run for the wall? Like, right into Vader?”

Another pop of the gun, but louder, and I duck under my arms again.

“I know it sounds crazy, but this thing is going to create a door in that wall.” He referred to his toy gun.

I had Three-Stooges images of us running for the wall and bouncing off my poster and into each other.

I got on my knees and grabbed the guy by his plastic jacket. “There’s a maniac with gun in my house. My foster parents are probably dead and you’re telling me to run into a wall?”

Footsteps pounded up the stairs.

Stranger-Dude leapt to his feet, yanked me from the floor and shoved me in the direction of my poster. “Go!”

My bedroom door burst open and the maniac glared at me with his blue bloodshot eyes. He pointed the gun and…click.

Stranger-Dude shoved me again and I hollered as Danger-Dude dropped his empty clip and slammed a new one into his weapon.

Vader’s red lightsaber loomed toward my face as I beat feet across my bedroom. At the moment of impact, I squeezed my eyes shut.

I stumbled forward and face-planted into what felt and smelled like cool grass.

Birds chirped. I curled my fingers into fists and heard the snapping of whatever I was grabbing handfuls of.

I pushed up on my elbows and opened my eyes to blades of grass between my fingers. A small crowd of folks gathered around me on some unfamiliar lawn in what appeared to be a park or some public place, with jogging paths and sidewalks.

“Come on.” Stranger-Dude tapped me with his black sneakers. “Let go of the grass and get on your feet. You’re safe now.”

I rolled over and squinted at the bright sun blinding me.

He stepped forward, blocking the glare, and the sun shone a big halo behind his head like one of those saints in the old Bible my foster mother had in the living room. He extended his hand and helped me up.

Whoever started crowding around us moved on, as if two people coming out of nowhere were a common occurrence. And we had to come from nowhere because my bedroom and the house I lived in were nowhere to be found.

“What the hell just happened?”

“Welcome to the future.” Stranger-Dude grinned.

“What?” I whirled to take in my surroundings. Yep, there were cars zooming through the air, just like a scene out of Star Trek. Kids were playing on swings with glowing ropes instead of chains. And a boy my age glided past us on an honest-to-God hoverboard instead of a skateboard.

“Okay, so wait a sec!” I dusted the dirt and grass blades from my hands. “What are we doing in the future and who the hell are you?”

He turned and gave me that smirk. “I’m you, but twenty years older. And as to what we’re doing in the future? We figured out how.”

“I know, right?” He grinned and kept walking.

“Oh, that was you, too.” The future me shoved his hands into his synthetic pants pockets.

I let that brainteaser scramble around my head for a few swirls. “Who?”

“That was the evil you that comes from a series of bad decisions you make. I’m the good you that makes all the right choices.”

“But why would the evil me want me dead?”

“He doesn’t. He wants me dead, so I can’t come back and save you to make all the right choices.”

I sat down on a hovering bench along the sidewalk. “Oh, my God, my head hurts.”

He pulled me to my feet. “Come on. I’ll explain everything.”

I hope you enjoyed the flash fiction this week! If you're an author, I hope you'll join me in the challenge and leave a link to your short story for this week in the comments.

Readers, let me know how you liked the story by leaving a comment below. I answer all the comments on my site. And if you enjoyed it, please…