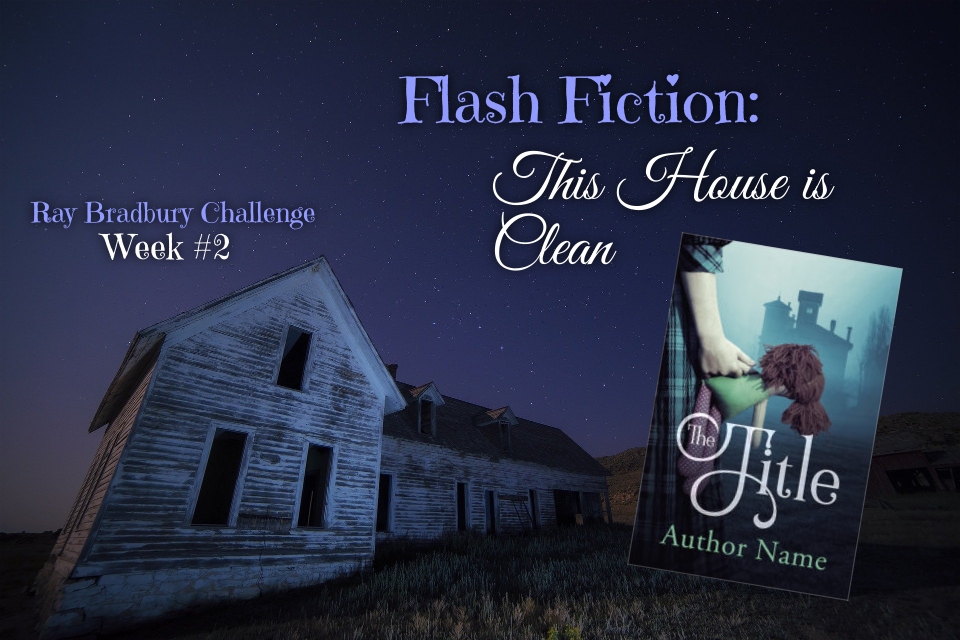 Sweet! We're on a roll. (Hey…would that be a sweetroll?? Ha!) Two weeks and counting on this challenge. I think I lasted four weeks the last time I did this, so we'll see if I can beat my pathetic record. LOL

This week's writing prompt was inspired by a pre-made book cover I saw on this website. Lots of great book covers there, so if you're an author looking for a design source, check it out. I learned about it from Sterling & Stone.

If you enjoyed this story, please comment below and/or share using the social media links at the end. Thank you!

This House is Clean

Karen forced a smile. “I heard similar rumors when I bought the house two years ago.”

“And you didn't experience anything unusual while renovating?” Mr. Randal narrowed his eyes.

“Mm-mm.” Not unusual by my standards. “I lived here during the remodel.”

Mrs. Randal's shoulders dropped an inch and she grinned. “Well, that's a relief.” She strolled the foyer of the vacant Victorian, her heels knocking on the hardwood. She reached for the knob of the closet beneath the staircase.

The older woman peered inside. “Three years ago, we came here for one viewing despite the rumors. Cold spots were bad enough. When I heard that child's laugh echo through the house?” She vehemently shook her head. “We were gone!” Closing the door, she headed to the kitchen trailed by her husband.

Karen released her breath and followed the couple. “That was the main reason I bought the place.”

Mrs. Randal swung her awestruck face in Karen’s direction. “You mean you wanted a haunted house?”

She shrugged. “I like to put more stock in what I see versus what I hear.”

“Don't believe in the supernatural?” Randal crossed his arms, like he dared her to deny his statement.

“Oh, I didn't say that.” She leaned against the granite countertop and smirked. “You can't renovate as many old houses as I have and not experience something strange from time to time.”

“But not here.” He continued his challenge.

Karen met his scrutinizing gaze. “There are no restless spirits in this house, Mr. Randal. As far as I know.” They’re gone now.

“Well, I love what you've done!” Mrs. Randal spread her arms wide, like a gameshow hostess presenting a prize. “You highlighted the charm of the home but gave it modern amenities.” She smoothed her hand over the stainless-steel French doors of the refrigerator.

The woman clopped across the kitchen tiles to the open-plan living room and gasped. “Wasn't there a wall here?”

“Yes. We tore it down and installed a beam in the ceiling to handle the weight of the second floor.” Memories of the dusty ragdoll she'd found encased inside the brick raised goose pimples along her arms.

“And the work is all permitted?” Mr. Randal clasped his hands behind his back and examined the ceiling.

“Absolutely.” Although the inspectors refused to visit the house, and she had to send videos and pictures to prove the progress of the work. “The city made the process easier than I expected since I wasn’t restoring the home.”

His eyebrows raised. “And no one pressured you to register it as an historical building?”

“Nope.” Why elaborate if he didn’t push?

“Huh. They must really like you. Normally, the city is a bitch to work with.”

Mrs. Randal laughed. “Too scared to stick around longer than necessary.”

The Randals continued to tour the home. Karen bowed out gracefully and waited on the porch swing.

A soft rumble shook the wooden columns in the roiling clouds above. Rain pattered the brick walk she'd laid by hand. The drops turned the powdery pink to dark red, one spot at a time.

She put her heart into each house. And though unraveling the mysteries of the homes caused turmoil, it was still difficult to let go. Each experience was life changing.

Karen closed her eyes. This one broke her heart the most.

The screen door creaked. The odd couple stepped onto the porch, but Mrs. Randal waved over her shoulder and trotted to the car that pulled up to the curb, where she ducked out of the rain.

Randal nodded as the car drove off, then gazed at the garden, hands in his trouser pockets. Karen pondered the strange couple. The eccentric older woman. The handsome but somewhat distant man. Was she the rich cougar nabbing younger prey?

“Are you available for other renovations? I'd like to hire you.”

He pinned her with his intense gaze. “Yes. What you did there is remarkable.”

Karen set her clipboard in her lap. “I work with a good crew and—”

“I'm not talking about the remodeling. Anyone can knock out walls and install counters.” He jabbed his thumb at the front door. “I don't know what you did to remove the spirits in this house, but it's nothing short of a miracle.”

“Excuse me?” Karen's fingers ached as she clutched the edge of her clipboard.

“You can stop pretending. I'm clairvoyant. I've been trying to get this house cleaned for years.”

“I'm not Randal. And she wasn’t my wife.” He advanced and stood over her, smirking. “Name's Tyler Croft.”

Her jaw dropped. “As in Croft Industries?” She bought the damn house from his firm.

He laughed. “You don't exactly advertise your services as a ghost hunter, Miss Pearson. I wasn't about to ask you to do something so off the wall without knowing for sure.”

Karen shifted uncomfortably. “I'm not a ghost hunter. I just happen to have…a knack for—”

“Cleaning houses?” He loosened his tie. “I like that you didn’t reveal the nature of the hauntings, even though I pushed. You seem to enjoy what you do. The fact that you seek out haunted homes says that. But you go on rumors, not knowing for certain if the house is haunted?”

“That's right.” Why did she feel like she got caught doing something naughty? “I'm not psychic, but I do have a fascination for the paranormal. Spirits seem to trust me.”

“Good. Are you interested in the job?” He offered his hand.

Her heart quickened as she stared at his palm.

“I confirm the houses are haunted. You supervise the renovations and clear out the ghosts. We split the profits. Deal?”

Karen lifted her gaze to his, those severe eyes throwing the proverbial gauntlet. She slipped her hand into his and gripped firm. “Deal.”

This sounds like it might be a neat paranormal series, huh? A woman who cleans ghosts out of houses, unraveling the mysteries behind the hauntings. A psychic benefactor who finds and buys the houses. A little hint of romance there, perhaps? Or a series that has these two dancing on the edge of a relationship? What say you, my awesome readers?

Wanna join me in the challenge and perhaps share the news between our audiences?

Good luck and have fun!!