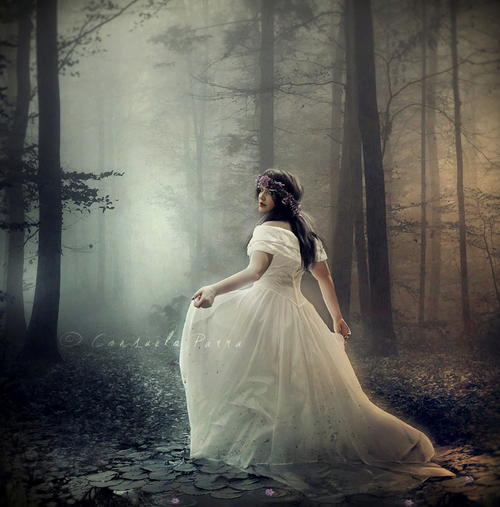 “You won’t believe. You must see.”

Megan Blake lurched upright on the couch, a cold sheen of sweat covering her face and body.

“Meg.” Her name was a whisper, an echo in her mind.

Mouth agape, Meg swerved her head side to side, searching for the source of the voice. “Meredith?” She stood and gawked through the high, floor-to-ceiling windows of their family vacation cabin. At the edge of the forest, the ethereal figure of her twin sister beckoned.

“Come. You won’t believe. You must see.” Meredith turned and glided into the woods.

“Merry!” Megan kicked the empty Dewar’s bottle with her bare foot and cursed. Shoving her feet into her sneakers, she grabbed her jacket off the back of the couch and dashed through the glass doors, jumping from the porch and bolting across the meadow.

Trees whipped by. Branches slashed her face as she pursued the ghostly visage, always just ahead, always obscured by lanky trunks or offending bushes. When Meg reached the next clearing, she skidded to a stop, windmilling her arms to keep from falling on her face.

“Come. You must see.” Meredith stood at the entrance to the caves.

“Everyone thinks you're dead!”

The blood drained from Megan’s face. “No! Don’t go in there! Everyone thinks you’re dead. Just come home.”

Meredith grinned and drifted into the cave.

“No!” She shot after her sister, tears streaming down her cheeks, as she plunged into the darkness. Sliding to a halt, she fumbled with her hip holster and yanked her cellphone free. With shaking hands, she finally accessed the flashlight feature and illuminated the path before her. The craggy walls of the cave were wet and glistening in the artificial light. “Merry!” The name echoed through the rock maze, boomeranging eerie howls. Megan whimpered.

She whirled to the left, shining the light down the passage and igniting Meredith’s eyes to a fiery red.

Her twin grinned, like some demon from a horror flick.

Meredith disappeared down the passage.

“No!” Quivering and keening, she followed her sister. “Merry…please come home. Don’t go any further.” Swallowing the dread weighing her heart, she pressed forward and trudged deeper into the caves. Winding, twisting, turning passages. The startling drips of water. The piercing echo of her sniffles.

Turning another corner, Megan stopped and gasped. She’d reached a dead-end. “Mair?” Inching forward, she shuddered when the light shone on a large gap in the earth. If she hadn't stopped where she did, she would have fallen into the hole. The light wavered on the jagged walls as her hand trembled.

Megan shrieked and spun, slamming her back against the sharp rocks.

Meredith stood no more than two feet next to her. Eyes dark and sad, smile forlorn, chestnut brows pinched over her nose. She swept her arm toward the chasm. “You won’t believe. You must see.”

Choking on her sobs, she shook her head. “No. Please, come home with me.”

She arced her arm, once again, toward the dark cavity.

Megan nodded, dropped to her knees, sniffling and crawling. Her cellphone in her hand, the light pointed toward the blackness ahead, she crept toward the hollow. Her fingers slid across the gritty stone and clutched the ledge. She screamed and threw her hands up to shield her face. Blood splattered. Bones cracked. Wails echoed. Gurgling…moaning…crying…silence.

“It’s okay, Meg. Everything’s going to be okay.” Meredith knelt beside Megan and brushed the hair from her brow. “You see? I said you wouldn’t believe. I said you must see. And now we can be together again.”

Megan hitched her breath and squinted at the bright light blinding her from above.

Megan nodded and grasped Meredith's proffered hand. When she stood, she threw her arms around her sister and they both wept and laughed, clinging to each other.

As the twins faded and rose like smoke, the ethereal light shone down into the hole where a cellphone with a cracked screen lay between the twins' broken bodies, five years decayed, still holding hands.

Okay, second week is up (and I know…I'm a wee bit late)!! Feedback is encouraged!!

Wow! This story made me cry. And I half-pantsed/half-plotted this one. I used the above picture as a writing prompt. I learned about a new artist – Consuelo Parra – and her digital artwork is an inspiration to me as a graphic designer AND an author. Her pictures invoke stories in my heart, so I'm using them as writing prompts. They're Gothic and paranormal and they speak to the closet Goth within my soul. PLEASE click on her picture above or the links below and show her some lovin' by LIKING her page and SHARING it with the world or WATCHING her at DeviantArt. She's truly talented!

The picture is titled “The Path of Dawn” and is a recent post on her DeviantArt and Facebook pages, so it caught my attention immediately. It said “ghost story” all over it. I planned the story up until Megan ran into the woods. After that, the characters took over and I was at the edge of my seat, wondering how this story would unfold. I cried writing the ending.

I do hope you enjoy the story as much as I did writing it. IF YOU LIKED THIS STORY, will you please SHARE it? There are social media links below, but you can also use these links…