Synopsis:  Masked in a Gypsy guise, Broderick MacDougal hides his vampiric identity while seeking to destroy the man who slaughtered his family. When an old Clan rival ensnares Broderick in a trap using an enticing widow, he is compelled to discover if she is bait or an accomplice, and the cinnamon-haired beauty is his next conquest.

Widow of an abusive husband, Davina Stewart-Russell clings to the only image that gave her strength during those dark times—the Gypsy rogue who stole her heart as a youth. After nine years, she is finally face-to-face with him again, but reality clashes with fantasy as she is confronted with Broderick’s passionate pursuit.

When Davina’s past returns to haunt her, Broderick is forced to reveal a dark secret worse than anything Davina thought possible. The challenge before them has fatal risks and neither of them is prepared for the sacrifices expected for the sake of eternal love.

Our Review [Notes provided by Jennifer Vayda]:
As the story begins and you are first introduced to Broderick, he's in really bad shape; a blood slave to a women who just wants to use him, confronted by an enemy who just wants to destroy him, and faced with an almost impossible decision…  To live, or die, and how best to get revenge?
You also meet a 13 yr old Davina. Young and carefree, she enters a Gypsy camp and is bewitched by the many wonders of Gypsy life.  While there, she runs  into a Gypsy fortune teller who says she must get her fortune told.  While doing so, Davina comes upon this handsome, dangerous looking man, who is oddly comforting to her as well.  Her fortune is thus:  Be strong and always look ahead.  Life will have it's ups and down but you will be O.K!
As Davina grows up, her life is not what she expected.  There is a war going on and she is confronted by way too much death, fighting, and betrayal.  The life changing events she encounters while maturing are chaotic and she feels at times they could end up being cataclysmic.  She tries to keep the faith and do what she was told in that Gypsy camp by that handsome, mysterious man that she can't get out of her thoughts–to be strong and keep going– but she doesn't always have the will to follow through and wonders if she WILL be O.K, or if she'll ever meet her wonderful mystery man again…
The book had a unique plot and the background, setting, and character building were vividly painted by the author.  You felt as if you were whisked back in time and were living the drama with the characters from 16th Century Scotland.
It's a long one, so it's not for those that want a quick read, but it's a non-stop page turner that you won't want to put down, and it'll make you want to laugh, cry, and scream at pertinent junctures the whole way through.
LITERAL ADDICTION Paranormal Book Club gives Midnight Conquest 4 ½ Skulls.
We definitely recommend it for dedicated Adult readers that love Paranormal Romance, Vampires and even those who enjoy Historical Romance novels with HEA endings. We’re looking forward to what Arial brings us with Book #2 of the Bonded by Blood Vampire Chronicles.
Midnight Conquest = 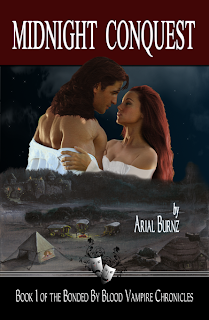