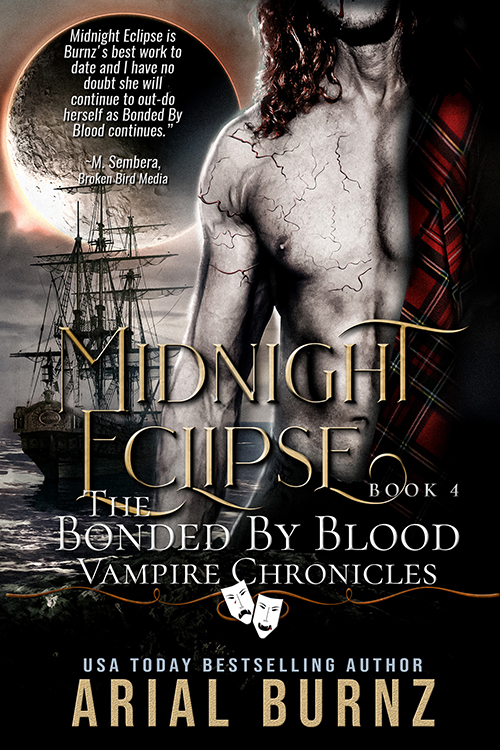 Greetings! At the request of many readers, I conducted an interview with Celina Hunter, heroine of Book 4 in my Bonded By Blood Vampire Chronicles and the reincarnation of Broderick MacDougal's Blossom…Davina. If you haven't read Books 1-3, then this will contain some spoilers, but if you'd like to dive in anyway, here's a little background on our storyline up until this point.

Broderick and Davina met in 1513 and fell in love, but becoming immortal with her beloved husband was not in the cards for her. Transforming her into a vampire (Vamsyrians in my series) would have set the Vamsyrian Council against them and they would have been fugitives. But also because our beloved heroine developed tuberculosis (known as consumption in those days) and though Rick's immortal blood could heal the ravages of the disease, it could not cure the disease itself. Davina died and Broderick was consumed with grief. In Book 3, Broderick is reunited with Davina. She is reincarnated as a Fire Witch named Monika Konrads, but because she is an Elemental, transforming her into a vampire would kill her. So, once again, Broderick loses his precious Blossom to mortality.

In Book 4, Midnight Eclipse, Davina is reincarnated, but this time as a Norse wolf shapeshifter and her family is bent on destroying him. It's a good thing Rick is a total badass and they don't stand a chance against him!

And now, here's my interview with Celina Hunter, heroine of Midnight Eclipse…

I stroll through the center of the Norse island village of Vulfheim, clustered with humble huts of businesses. The sun is peeking through the clouds gliding overhead, a brisk wind coming off the North Sea pushing them along. Giant silver-haired residents, going about their business, eye me suspiciously in their daily tasks. The Manegarmians – or Moon Wolf Clan – don't like outsiders and as a human, that's exactly what I am. I hug my clipboard of questions to my chest, ineffectively hiding behind it for security, as I navigate more cautiously through the dirt pathways into the residential A-framed cottages. Finally arriving at my destination, I raise my hand to rap my knuckles against the finely crafted door, edged with Celtic knot-work carved into the wood. But the door swings open and the entrance is filled with the familiar and always impressive, muscular frame of Broderick MacDougal, vampire hero of my Bonded By Blood Vampire Chronicles.

“Arial!” his deep voice booms. Rick lifts me into his arms, my clipboard clattering to the floor forgotten, hugging the breath from me…and not because he's squeezing too hard! Setting me down upon my rubbery legs, he snatches my clipboard from the earthen tile floor and returns it to my hands. “Sorry about that, lass! Celina is in the bedroom dressing, so she'll only be a moment.” Broderick grabs his leather satchel from the cushioned chair near the door and swings it over his shoulder. “I will leave you two lassies to your interview.”

“Dressing?” I raise a suspicious brow. “You didn't wear her out before I got here, did you?”

“Nothing,” Celina snaps as she enters the living room, scowling at her husband. “Arial's readers already know you're a rogue, you don't need to elaborate.” With humor in her eyes, she clenches a narrow wooden needle between her teeth as she sweeps her silver tresses from her shoulders. Twirling her hair skillfully into a bun at the back of her head, she inserts the wooden stick to secure her knot and crosses her arms.

Broderick saunters forward and dips his head to her for a swoon-worthy kiss. My face flushes. The man is shameless in his expressions of love for his Blossom. I sigh. I do love my characters.

Celina pushes against his shoulders playfully. “Go on now. You've already kept Jericho and Chandler waiting for half an hour.”

Pecking my hot cheek with a kiss, Rick dashes out the door leaving a sizable absence in his wake. “And what are the boys up to this afternoon?” I ask as Celina motions for me to sit in the brocade cushioned chair near the door.

“Sparring lessons and close combat battle techniques.” She settles into the matching couch of green and rose brocade. “Broderick is teaching them how to use their shifting abilities in battle against Vamsyrians.”

“How exciting!” I flip through my notes, circle a couple of key items and then redirect my attention to my heroine. Her bright blue eyes are filled with delighted anticipation. “Have you been looking forward to this?” She nods and tucks an unruly silver strand of hair behind her ear. “As an avid reader myself, I would love the opportunity to meet the characters in my favorite books. I will admit, I'm a bit nervous, but my excitement is overriding my apprehension about what they might think of me.”

“Well, I can assure you, you're the kind of feisty heroine they love to read about. You bit Broderick, for goodness sake. Bit him!” I laugh.

Celina blushes and her smile falters. “He was the enemy of my clan! I was protecting my family.”

I shake my head. “No one faults you for it, my dear. On the contrary, many have told me they loved it! I think it showed everyone that you would defend those you love just as fiercely as Broderick does his own…and that meant it was love at first bite.”

“One other thing a few of my readers have said is that they like how you are a warrior and still allow your feminine side to come through.”

Celina quirks her mouth to the side and raises a silver brow. “All right, then.”

“I've never spent time pondering the matter, to be honest.” She shrugs. “But I like the observation, nonetheless. A thank you to your readers. I'm flattered.”

“So if your brothers are sparring with Broderick, he seems to be pretty accepted by the family now, yes?”

Celina tilts her head side to side, her eyes scanning the ceiling as she considers my words. “For the most part, yes. My brothers, most certainly. I thought my father had put his differences aside at the wedding. He gave Broderick the rings of our clans, after all, and gave such a wonderful speech, but as the months went by, the old resentment for vampires returned. Pebi tries to suppress them when he's around us, but I see the dirty looks he gives Broderick when he thinks I'm not looking.” Celina shrugs a shoulder. “Pebi can be a hard wolf to deal with.”

I nod. Axel Hunter is indeed a harsh man and I wrote him to be so to help shape Celina's personality.

Celina frowns and drops her gaze. “I have tried to pride myself on being a strong woman, but I have come to realize I was not so with my father. I have been on the battlefield against humans and wolves alike, and yet I always cowered before my father.” She bravely returns her gaze to mine. “Broderick taught me to stand up to Pebi just by defending me. I think through Broderick I realized I was worth defending. The first time I finally stood up to my father, I discovered much of my fear of him was from when I was a pup.” I grin at her wolf reference, but I can relate. My father wasn't a nice man either…and that was putting it mildly. They say authors should write what they know…and Ian Russell, the villain in my first novel, had to get his personality from somewhere. Sad, but true. I didn't stand up to my father until I was in my late twenties. “So, you referred to yourself as pup. You associate more with the wolf side of your kind?”

Relief softened Celina's face and she smirked. “We are, first and foremost, the grandchildren of the Norse wolf gods. The human part of us is almost regarded as an afterthought.”

I glance at my notes. “One of my readers, Carly Moore, asks, ‘Does transforming into a wolf or back into a human hurt?'”

Celina shakes her head. “Not at all. It's no different than the transition of standing up from this couch.”

My stomach lurches as, right before my eyes, Celina's body dissolves into a cloud of shimmering star dust and mist, then reforms into the massive silver wolf now lounging on the couch. Celina is about six-feet tall, so still impressive in her human form, but that spectacular transformation – only a few feet from me – is quite a shocking experience. My hands unconsciously clutch the arms of the chair.

She jerks her head back and bares her teeth as if smiling, bobbing her head with her pointed ears flattened in amusement, her tail wagging. Puffing into billows of sparkling clouds, she once again transforms into her human form, guffawing. “You should have seen…the look on your face!” Rocking back and forth, she eventually reins in her laughter. “I'm sorry.” More chuckles. “I guess I should have warned you.”

After I recover from the startling display, I release a nervous chuckle. “Ha ha. Yes. I'm sure the sight was quite amusing.” My cheeks flush with embarrassment.

She sputters another bout of laughter into her hand.

I clear my throat. “Your acute sense of smell and sight. Do you have those in your human form? Or only in your animal form?”

“As a wolf, my sense of smell and sound is much more pronounced than when I'm in human form. However, through the years in dealing with your kind, I've come to understand that even my senses in human form are better than natives of this realm.”

“This realm being Earth…what you call Midgard.”

I flip my notes up to the second page and scan my scribblings. “What's your favorite dish or type of food?”

“Oooh, lamb, to be sure.” Her sapphire eyes sparkle with mischief. She winks.

I chuckle and run through some of the standard questions from my readers. “What is your favorite color?”

“Green.” Her lids droop with a dreamy expression. “Emerald green.”

The color of Broderick's eyes. Smirking, I tick off the next question. “And finally, dark, milk or white chocolate?”

Her brows raise. “There's such a thing as white chocolate?”

I wince. I hadn't thought about it, but I guess white chocolate wasn't around during the 1700s. “Sorry, I guess that will come later in history. Um, how about I rephrase the question. Do you have a favorite dessert?”

“Hrmmm…I don't eat desserts much.” She tapped her finger against her bottom lip. “I'm rather fond of peaches and cream, though. Jericho always tries to get some for me when he ventures to the main land.”

Flipping back and forth between the two pages I have, I don't really have anything else to ask her and I'm a little stumped about anything to add. However, I notice that Celina is a little antsy, drumming her fingers against her knee. “Well, I believe that's all the questions I have for you.” I begin to gather myself and stand.

Celina stands with me and envelopes me a sisterly hug. “It was my pleasure. Thank you for the visit.” Before we walk out the door, she snatches her short sword and straps it to her hips.

I learned after I left that Celina was very anxious to join Broderick and her brothers in their sparring session. She eagerly jumped in and gave the boys a whoopin', giving them all a run for their money. Broderick was proud and her brother's had their pride bruised a little, so I was told. Incidentally, research after this article proved white chocolate to be an invention of the 1930s.

I hope you enjoyed the interview with Celina! If you have any questions for her, you can leave them below. I will be happy to have her answer them!