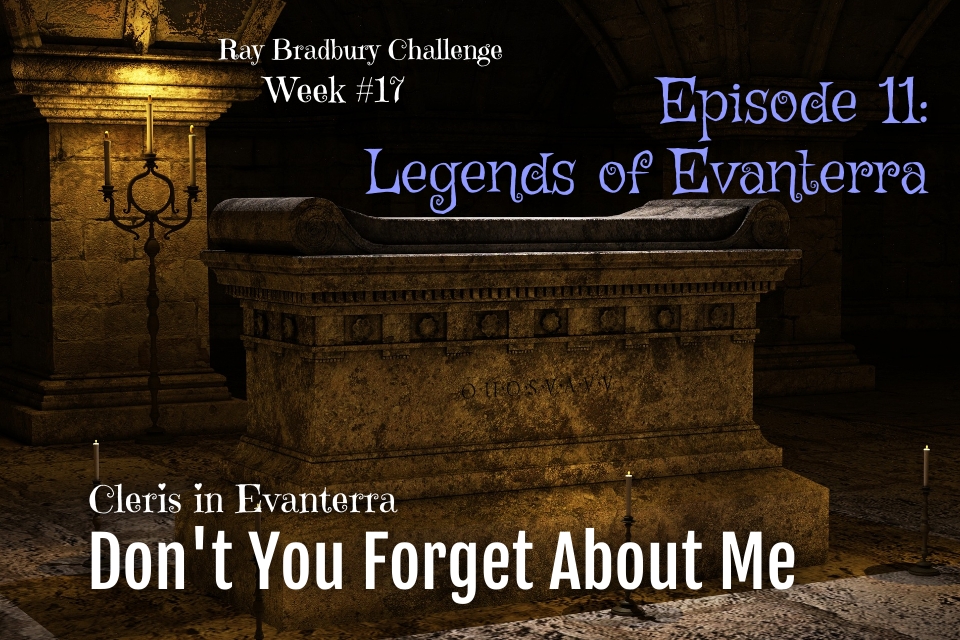 We continue our Legends of Evanterra web serial for the Ray Bradbury Challenge. Last week we left off, Cleris's poor wizard friend and adviser had been captured by the Blood Lord, Nicolai the Blackheart…

Episode 11: Don't You Forget About Me

Cleris clenched her fists so hard, her nails dug into her palms.

Despite the anger she held toward Melchor, she had expected they'd have more time. That she and Melchor would make amends, and hanging onto her ire was more about blaming herself and refusing to admit he was right.

He'd charmed her mind to forget and shoved her through the portal to Earth to protect her family, her kingdom. Tough love was the wizard's methods, and his intentions had always been for the welfare of her family.

So knowing she was about to lose her old friend to an old enemy was a bitter pill to swallow. Not to mention the fact that all his efforts were now for naught, now that he was in the hands of Nicolai Moonfall.

From half-way across the world, however, she was helpless.

Even so, she stepped toward the mirror to…protest? Strike a bargain? “Wait.”

Her father, Estelar, grabbed her arm. “No, Cleris.”

“Excuse me, princess?” Nicolai's mouth curled into a devious grin, revealing his fangs. “Was there something you wanted to say?”

She fought back the tears threatening to spill. “Give me the chance to say goodbye, as you stated.”

“And what exactly do you expect me to do from here?”

Nicolai bowed and stepped aside, giving her full view of the broken and bleeding wizard.

“Melchor, I know the thrall won't make you ignorant of what you do at Nicolai's command.”

The wizard winced, as if her words pierced his flesh. He nodded.

“Take to heart that I won't blame you. If you make it out of this alive, my dear friend, I will not hold you responsible for what you can't control.”

“Forgive me for failing you, Your Highness.” His voice graveled with regret.

If he did survive, could he live with the guilt? She knew him. He would blame himself for not anticipating Nicolai's move. Oh, that she could wipe away his memories, like he had done to her.

Her heart hammered in her breast.

“Thank you for trying to protect me when you sent me through that portal, Melchor.” She gazed hard at him, willing him to pick up the hint.

Melchor nodded, but then his one good eye snapped toward her. “Thank you, sweet child.” Hope glittered in his eye and his mouth muttered the charm.

“There's nothing to thank me for,” she continued, raising her voice and hoping to create enough of a distraction. “I was such a willful child, I don't know how you ever put up with me all these years. Farewell, my friend.”

Nicolai dashed to Melchor's side in the middle of her prattle. “What are you doing?” He seized the wizard's jaw.

Melchor's eye glowed lavender and then faded to a mindless haze. His face went slack.

“No! NO!” The vampire turned his menace to Cleris. “Curse your soul to the—”

Estelar swept his arm wide and the mirror went black. “What just happened?”

Cleris dropped to her knees, finally releasing her grief, sobbing into her hands.

Her father gathered her into his arms and carried her from the room. “Cleris, child, what did Melchor do?”

Burying her face in the crook of his neck, she struggled to rein in her emotions. By the time he set her upon a soft mattress, she swallowed past the sorrow clogging her throat. “A…m-memory charm,” she stuttered between breaths. “Melchor is a master at them. He spelled me with one prior to sending me to Earth for a year. He's put one on himself and now he's useless to Nicolai. Unless the Blood Lord can find some way to break the spell, Melchor's memory is either wiped or locked away.”

“And what if Nicolai kills him because he's useless?”

Cleris hiccupped and covered her face. ” Whether the vampire kills him or Melchor is unable to survive the guilt, he's as good as dead anyway.” After several moments of lamenting the loss of the wizard, she wiped her face and hugged her father. “If Nicolai tries to break the charm, then we have a little time and fraction of hope. We must figure out our next steps.” She glanced around the bedchamber to gain her bearings.

“First thing's first.” Estelar's face hardened and he rubbed the bracelet on his wrist. The green stones glowed. “Since Thalia has been compromised, we cannot take any chances that Nicolai will use her to create portals to existing links.”

Sumina appeared at the door and bowed. “You summoned me, Your Grace?”

“Yes. Contact the Court of Gates immediately. Let them know Thalia has been thralled by the Blood Lord and all portals must be shut down.”

The faerie gasped. “Right away, Your Grace.” Wings sprouted, the messenger dashed like a streak of pastel lights.

Cleris chewed the inside of her mouth. With the portals down, it could take them weeks to travel to Lourean, depending on their mode of transportation.

Based on Melchor's surroundings, it looked as if Nicolai was still at his island fortress off the coast of Mastonia. That meant if they wanted to rescue Melchor, they'd need a ship to traverse the Sea of Tranquility—a large expanse of water with minimal currents and no winds. Any vessel would have to be propelled by magicka, and that journey added at least another week.

And then there was the defense of her kingdom. Before Cleris arrived in Merellien, Thalia had said the Blood Lord pressed his attack and the barrier over Lourean weakened. Cleris assumed the Matron must have meant it wasn't Nicolai himself, but his troops—a legion of brutish orcs commanded by vampires, many of whom were necromancers. Blood and death were the fuel for their magic.

“I don't like the crease on your brow, daughter.” Estelar crossed his arms over his broad chest.

“I'm trying to figure out how we're going to get to Lourean and what to do about Melchor.”

“You are not doing anything.” He shifted his stance to be more scolding, with his hands on his hips. “Your safety is paramount, so you're staying here. And we can't do anything until I meet with the Fae Courts.”

Cleris pushed to her feet. “At least send word to the other kingdoms. Get them to reinforce the boundaries.”

“Unfortunately, they aren't going to listen to you. Your rightful place on the throne has been threatened, remember? That's why we need to summon the Fae Courts. We must make your position in the realm known and they must decide whether or not we get involved.”

“What? I'm not just going to leave the Eastern Kingdoms in civil unrest with this threat hanging—”

“I'm sorry, Cleris. We don't have a choice.” He placed a supportive arm around her shoulders. “Come. Let us return to the Chamber of Mirrors and see what the High Courts have to say.”

And that's it for this week. Be sure to stay subscribe to my newsletter to get the announcement of the next webisode!