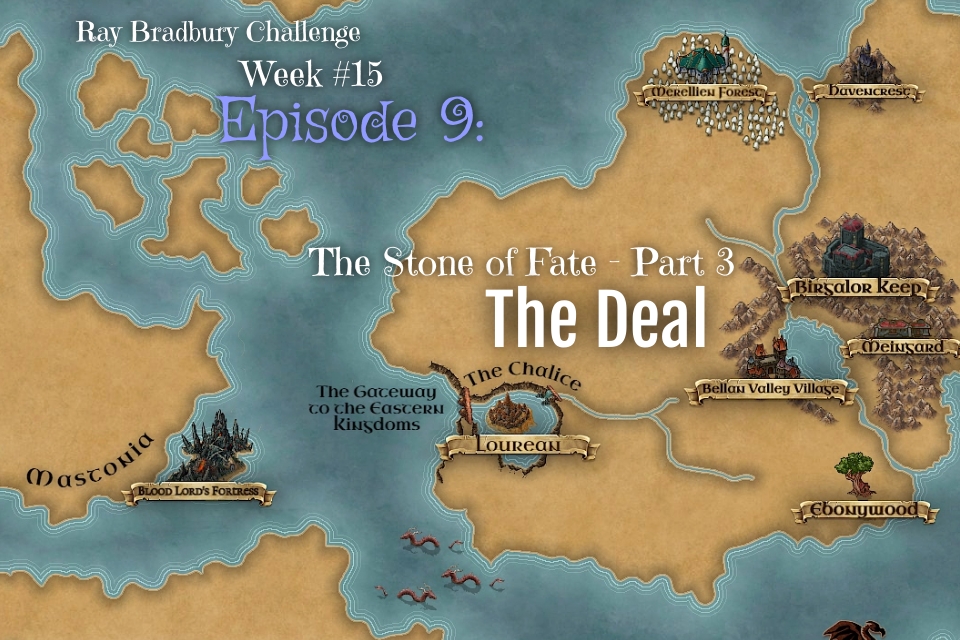 Greetings, my wonderful readers!! Here we are at week 15 out of 52 of the Ray Bradbury Challenge. This week, we're going back to the Stone of Fate storyline and finding out what happened to Faelar (elf) and Mace (human) after they escaped the dungeons of the dwarven stronghold, Birgalor Keep.

Check out that awesome map picture we have this week!!! I created the beginnings of Evanterra with an online program called Inkarnate. With it, I'm slowly building this imaginary fantasy world and I'm super excited to see it coming to life. I hope you enjoy this week's webisode…

Faelar poked the long branch into the fire, stoking it before tossing another log onto the flames. Sitting on the boulder, he glanced nervously at the human laying on his back atop the bedroll, still unconscious well after they’d escaped Birgalor Keep. He prayed to Damia he hadn’t injured Mace too severely, and cursed once again for the blow he’d given the man with the dwarven axe.

He could blame the weapon, the fragility of humans or the tense circumstances of their escape, but deep down Faelar blamed himself.

The human had no qualms about disintegrating the dwarf he’d tricked into letting him in the dungeon to get to Faelar, so why should Faelar be so concerned for the ruthless man? No life—dwarf, human or elf—could be disregarded so carelessly. At least not as far as Faelar was concerned.

But Mace had freed him from the dungeon and, perhaps, even saved his life.

There’s no telling what Faelar’s fate would have been in the hands of the dwarves. They only imprisoned him because they caught him in their archives. It was very doubtful they knew he was, quite possibly, the only living descendent of Silveril and, therefore, the only one who could access the Legacy of Silveril if the treasure could be found. He could have been executed within the week, or rotting there for the rest of his life.

Then, of course, there was the map, which only Mace could produce. Without that map, Faelar would never find the treasure. If this human ended up dying because of Faelar’s stupidity, the elf might as well end his quest here and now.

His entire future hung on whether or not Mace woke up.

The elf pushed up from the rock and resumed pacing, retracing his steps around the campfire. To salve his conscience, he grappled to the notion Mace was using him worse than he was using Mace. But the truth was…he’d never taken the life of another and he didn’t want to start now, no matter what the reason.

“Trolls balls, man,” he complained under his breath. “Wake up.”

Faelar whirled at the soft growl of laughter coming from Mace’s chest and almost slumped with relief. He curled his fingers into fists and glared at the amused human, who pillowed his hands behind his head.

“I just can’t take it anymore.” Merriment seasoned Mace’s voice and he glanced around the small camp in the cave. “I knew elves were uptight, but you have got to be the most neurotic elf I’ve ever met.”

“You’ve been awake for a while, haven’t you?”

“Quite a while.” Mace smirked.

Faelar crossed his arms. “Since I made camp?”

“Meingard?” Faelar cursed under his breath, calling the human all manner of troll and goblin body parts.

Not only had the dwarven mining town been their first stop after an hour trek through the mountains from Birgalor Keep—bypassing Birgalor Village to avoid getting caught—but Meingard was at least two hours behind them. Not to mention the time it had taken set up the camp and hunt for dinner, which Faelar hadn’t the stomach to prepare because of Mace’s unknown condition.

Faelar grabbed the two conies he’d arrowed and tossed them at Mace’s belly. “You can cook dinner, then.”

Mace sat upright to catch the carcasses, then palmed his head and winced, but still chuckled. “Ow. Where did you put the vegetables and spices you bought from the market?”

Faelar closed his eyes and inhaled a calming breath. “I could have used your help while you were flat on your back, pretending to be incapacitated.”

“And have the villagers asking questions about the human you stashed into the back of your cart?” He touched his fingers to the knot on the back of his head. “Thanks for taking good care of me, though. But you did owe me.”

“That you whacked me on the head?” Mace stood. “Or that we left Birgalor without the list?”

“That I whacked you on the head.” Faelar avoided eye contact and grabbed the burlap bag with the food from the market. He dropped it near the campfire on his way to the cave entrance.

“Why did you whack me on the head?”

The elf took the wooden crate from the two-wheel cart and set it next to Mace. “There’s a stew pot in there if you want to use it. I already brought up a couple of jugs of water from the stream. Are you roasting or stewing?”

Mace pulled out the stewing pot, cutting board and carving knife from the crate and shrugged. “Okay, I’ll make us a nice rabbit stew while you tell me when you planned on mentioning this.” The human tugged a folded piece of living parchment from his trouser pocket and—holding it between his index and middle finger—waved it with a grin.

Faelar gawked at the red elven rune on the side of the paper and patted his own trouser pockets finding them empty. The list! “How in the black pit did you get that off me?”

Faelar grumbled and sat on the rock.

“Did you get Silveril’s list after you knocked me out? Or did you have it all along?”

“The latter.” Faelar picked up three of the long, slender sticks he’d gathered from the forest and snatched the ball of twine from the crate. “I pilfered the list from the archives right before the dwarves caught me. They’re weren’t very good about checking me for stolen goods prior to throwing me into the cell.” He began fashioning a tripod for the stewing pot. “So, now that you hold everything, how can I…”

Faelar’s hands stilled and his eyes darted between the parchment and Mace’s contrite expression.

The elf grabbed the living paper and tucked it into his pocket. “Why?”

Mace shrugged. “Look, I understand why you don’t trust me. I made a deal with the dwarf to let me into the dungeon and then I betrayed him. You’re wondering if I’m going to do the same to you.”

“Betrayed him?” The elf continued wrapping the twine around the sticks, his hands tugging and jerking his pent-up animosity. “You killed him, Mace.” He darted a vicious glance at the mage. “Turned him to dust.”

“I’ll have you know, that dwarf was not some innocent castle guard. Letting people in and out of that dungeon, for very unsavory reasons, was how ol’ Hemdus made a lot of money on the side.”

“How unsavory?” Faelar narrowed his eyes.

“Let’s just say, any one of the female prisoners could usually count on having an eager bedmate—whether she wanted one or not.”

The elf’s breath caught in his throat.

“Hemdus practically turned Birgalor into his own brothel for people who liked that kind of experience. You can bet I’ll not shed any tears for that bastard.” Mace focused his attention on skinning the first rabbit. “You and I are both after the treasures of Silveril and we can’t do it without each other. You need the map and I can’t use it without you. I’m sure there are some secrets of the list to be discovered, as well. With our combined knowledge and special abilities, we just might live through this crusade and find ourselves richer for it—in more ways than one.”

“I didn’t know that about the dungeon guard.” Faelar set the tripod over the campfire, which had burned down to glowing coals and a gentle flame. “And you’re right…we can’t do this without each other.”

Duh, duh, duuuhhhh! Woo hoo! I hope you enjoyed the episode this week. If you did, PLEASE share it with your friends by using the social media buttons below.

Thank you and until next week…