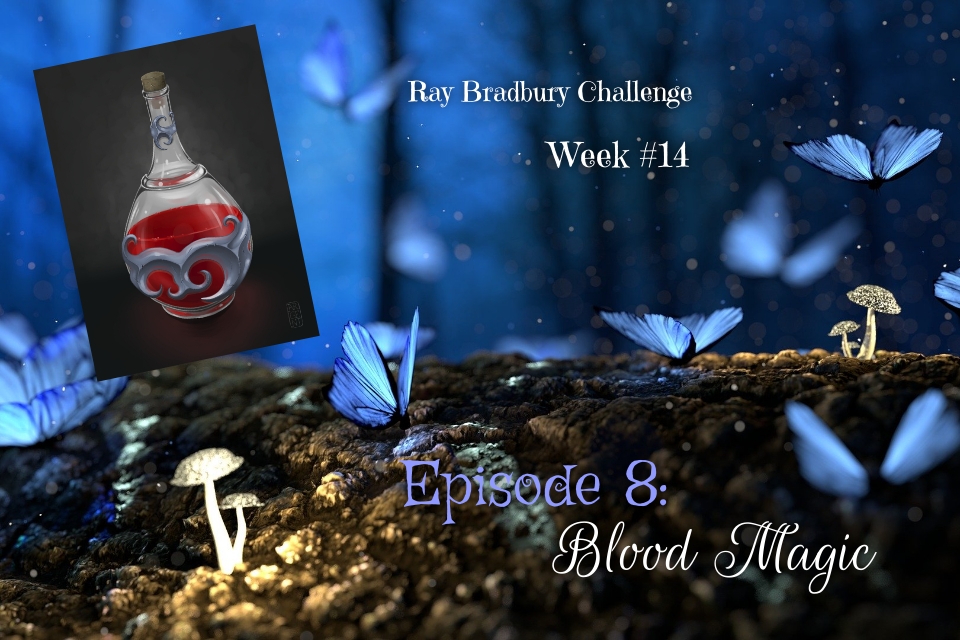 Greetings! We're at week 14 of 52 in the Ray Bradbury Challenge.

I've never written a web serial before and this is proving to be very challenging. You see…I'm a PLOTTER – a writer who likes to plot out every step of a story before I actually sit down and write it.

But to write this serial, I'm forcing myself to be a PANTSER – a writer who writes by the seat of my pants!

This is totally outside of my comfort zone! I'm trying not to panic. *Arial takes deep breaths*

IF you're new to my blog and this is your first episode in my web serial, you might want to CLICK HERE to start at week 6, which is the beginning of the Evanterra storylines. The Stone of Fate (starting week #6) is a story that will be intersecting the storyline of Cleris in Evanterra (starting week #7), so we're switching back and forth between them.

I am your true father.

The words bounced around my head like a superball as I tried to grasp the meaning of them. My jaw unhinged and my fingers curled around the edge of the stone bench where I sat.

“I know this must come as a shock to you.” Estelar gingerly sat beside me and clasped his hands in his lap.

The breath I’d been holding left my lungs. “Understatement of the millennium, Your Highness. I’d found out Myril wasn’t my father just over a year ago, but I didn’t know…”

“That I was your father. Yes, I know. I’m sure you have countless questions.”

I nodded. “The first one being…what happened?”

“Myril was married to my mother at least ninety years before I was born. So that means she was unfaithful to him. Unless she was living a lie my entire life, she was very devoted to my fath—” I bit my lip to stop the ingrained word. “To Myril. Why would she betray him?”

Estelar inhaled deep, closed his eyes and nodded. “Yes, she was devoted to him. But she never loved him. At least not in a romantic way.”

I opened my mouth to protest, but hesitated. Hindsight was twenty-twenty—the past being seen with the clarity of new truths.

“Were you ever told the story of how your parents were married?”

“Of course, I was.” I pushed up from my seat, for it was my turn to pace. “Everyone in the kingdom knows their story. Their marriage was regaled as the stuff of legends. The Blood Lord captured my mother, trying to force her to marry him. But his kingdom wouldn’t recognize the marriage unless Nicolai performed the blood rite on the night of the Joining.”

Five times a year, Evanterra’s moons aligned with each other, showing as only one moon in the sky—the Joining.

“That gave my father…Myril…the time to lead the rescue to free her and that’s how he won her hand, even though he was only a noble and not of royal blood.” Again, that title came so readily to my lips. I stopped and examined a white rose glistening in the sunlight before I braved a glance at the Prince.

“Myril was a father to you, Cleris.” The sadness and compassion in Estelar’s eyes broke my heart. “You do not have to deny him that honor now that you know we are kin.”

I huffed. “I didn’t get along with him very well. We never quite saw eye to eye. He was cold and judgmental. Last year, after I heard him and Mother arguing about who my father really was, his behavior over the years made sense. He resented me. I don’t think it was from the day I was born, but somewhere around my early twenties, something changed.” I chortled a mirthless laugh. “I’d always thought it was because of that youthful angst that’s typical of becoming an adult. Now I think that time might have been when he suspected or found out I wasn’t his.”

“Had he known for so long?” Estelar seemed to ask the question of himself rather than me, his gaze far and away into the past.

“You never answered my question.” I stood behind the rose bush, almost as if to shield me from the truth he would reveal. “What happened? Why would my mother betray Myril?”

A wilted smile curved his lips. “To save her kingdom. And to help me preserve mine.” He stood and strolled to a honeysuckle bush where flutterbys danced in the air around the blossoms. “At the time, the Blood Lord’s army was on the verge of breaking Lourean’s defenses. Lura came to Merellien during the Winter Solstice celebrations, knowing all members of the High Courts would be present. I happened to be the first member of the court she encountered. And when she pleaded her case, desperately seeking our magic, I saw the salvation of Merellien in her eyes.”

“When a fae looks into the eyes of their true mate, they see their future generations. As the Prince of Veils, not finding my mate meant I would not have an heir to my throne. After five-hundred years of searching, I began to lose hope.” Estelar gazed over his shoulder at me. “I never imagined I would find my mate in the eyes of an elf.”

The Prince strolled along the garden path, his head bowed as he continued.

“I agreed to help Lura on the condition she stay in Merellien as my guest for one cycle of the moon. Since Nicolai was using blood magic to breach the kingdom, blood magic was needed to defend it. So I crafted an anointing potion to be a shield against Nicolai, which I sent back with Brindle, Lura’s handmaid, along with my instructions on how to cast the shield. That is why the shield around Lourean still stands, but your mother is no longer here to anchor the  spell.”

“Did my mother know she was your true mate?”

There was that sadness again, which drew down the lines of his handsome face and probably why he would not look at me. “No. I had told her my price for the protection of her kingdom was for her to bear me a child and that no one must know the child was mine until the right time. That they must believe the baby was Myril’s. She said that would be impossible, that Myril could not sire a child and everyone would know the child was not his.”

Okay, now I had to sit down. Myril was shooting blanks? That was why they didn’t have me for almost a century after they wedded?

“You look a little pale. Shall I stop?”

I laughed. “Look, hearing about my parents'…whatever…sexual problems is not a topic I want to dive into with enthusiasm.” I ran my hand down my face to wipe away the shock. “But in all honesty, I’m curious about how this plays out.” And what it will mean for me. I’m sure Thalia diverting me to Merellien was not as simple as setting up a family reunion for a father and daughter. This was leading somewhere important. “Please continue, but…skip the gory details, if you don’t mind.”

Estelar chuckled. “In your mother’s defense, she was not eager to betray Myril. Quite the opposite. To make a long story short, I spent my time wooing your mother, to ensure our union was something she wanted as well. And that is how we fell in love and only then did I reveal to her she was my true mate.” That sad smile graced his lips and he lifted his eyes to mine.

“And the problem with Myril being…sterile?” God, what a horrible rhyme.

Estelar tried to suppress the humor, but failed. He cleared his throat. “Lura was to tell Myril the reason she stayed here was to wait for a fertility potion, which he was to consume the night they lay together upon her return. Fertility potions are complex and take time to concoct.”

“But what had you hoped to gain by my mother having a child you weren’t going to claim?”

“I never said I wasn’t going to claim you, Cleris. I just said everyone was to believe you were sired by Myril…until the right time. And that time is now.”

“And here’s the punchline.”

“You picked up some very strange sayings during your time on Earth. High jacked? Punch line?”

I raised a challenging eyebrow. “Don’t change the subject. Why now?”

“With Lura and Myril gone, the strength of the anointing ward is waning, and you and I can easily create a new potion to revive its strength. But the bigger threat against Lourean is the legitimacy of the throne.”

“Did Nicolai find out I wasn’t sired by Myril? And why would that matter anyway? The inheritance of the throne is through the mother's bloodline.”

“And yet that is the seed Nicolai has planted to sow discord amongst the Eastern Realms. He’s trying to divide the kingdoms and cause a civil war. The legitimacy of your birth—the possibility that Lura lay with a commoner—is being questioned. If you are not of pure royal or noble blood, you could be dethroned.”

And that is it for this week! I hope you’re enjoying the continuing storylines.

I can’t always find the source of the artwork I grab, but when I do, I give credit where credit is due! The artwork of the potion bottle today was created by a very talented artist named Adam Ardent. Please visit his page and show him a little lovin’ by commenting and following him HERE.

If you are enjoying these stories, PLEASE SHARE them with your friends. Click the social media buttons below to share them on your favorite social media platforms.

Thank you for taking the time to read these each week and PLEASE leave a comment or questions about the stories below. I always answer comments left on my blog.

Until next week, that’s my two pence…