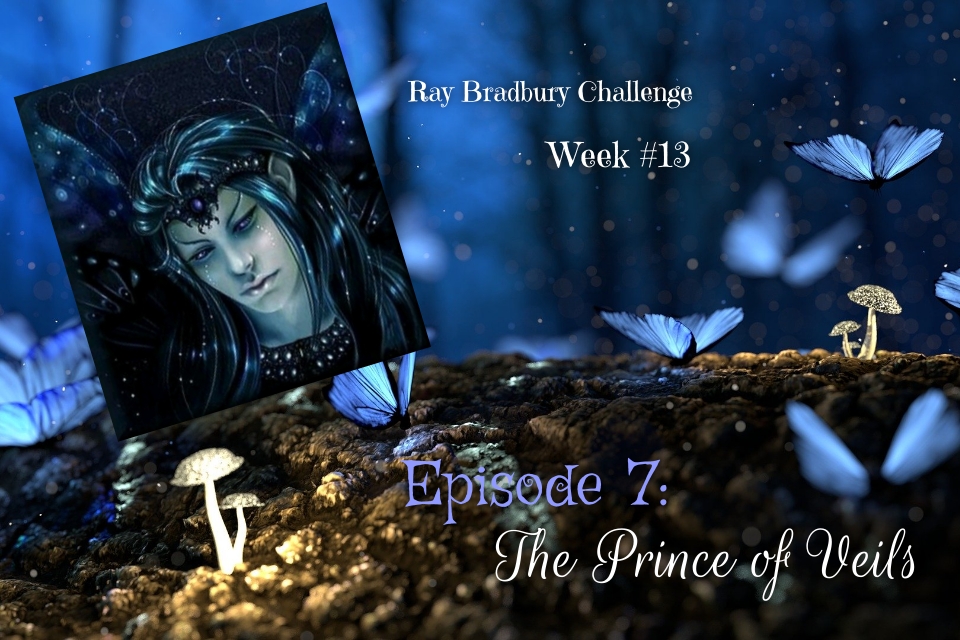 Here we are at week 13 of 52 for the Ray Bradbury Challenge, and today I did not use a prompt. This story is really starting to flow and I'm having a ball, so no prompt needed. I hope you're enjoying these weekly episodes of my web serial.

This week, we find out what happened to Cleris after she stepped through Thalia's faerie portal and found herself at the business end of many spears, surrounded by the Merellien warriors.

If you're new to my blog and would like to get caught up on the stories, CLICK HERE to start at the first episode in the Legends of Evanterra with A Twist of Fate. We're bouncing between two storylines following these main characters

Without further adieu, I give you…

The Prince of Veils

Spears still pointing at my chest after several minutes, the shock of the Merellien guards' aggressive greeting wore off quickly.

“Put your weapons down.” The commanding voice reverberated around the cave. “This is the Princess of Lourean.”

The lavender skinned warriors retreated and knelt, gazing at the ground.

I lifted my eyes and held my breath. The most beautiful man I had the privilege to behold strolled down the rock-carved staircase. But I knew this man, I realized as he came closer.

Prince Estelar Merellien, who sat upon the throne of the Court of Veils, the Keepers of Secrets in the faerie realm, and native-born son of the Merellien Forest.

“Your Highness.” I dropped to one knee.

The Prince’s deep chuckle warmed the very air around me. “Rise, child. We are equals, you and I.”

As I stood, he curled his index finger under my chin and his violet gaze met mine. A mixture of emotions moved across his lilac skin, but I couldn’t quite read them. Pain? Compassion? Love even?

“You look just like your mother.” That most definitely was sadness on his face. “May the heavenly realms be blessed with her spirit.”

A lump formed in my throat and I blinked away the sudden tears.

“Welcome to our kingdom.” He wrapped an arm around my shoulder and guided me toward the staircase he’d descended. “I apologize for the rude reception. The unexpected activation of the portal alerted the royal guard. Thalia’s message came to me just after you stepped through.”

“And Melchor? Where is he?”

Estelar inhaled deep and faced me. “He is in Lourean, most likely singeing the ears of your elite guard.”

Yes, he probably was cussing up a storm. “Thalia hijacked me.”

“I beg your pardon?”

I smirked. “Diverted my destination, Your Highness.”

We proceeded up the staircase into a crystal-powered lift, which sailed straight up through the rock, leaving the cavern, guard and portal behind. I gripped the polished silver rail etched with faerie designs that reminded me of a mixture between whimsical swirls and Celtic knots. Patterns often found in the wings of the fae.

When the lift broke free from the earth and soared upward into the Merellien Forest, I gasped and gawked at the indescribable beauty. The famed white leaves of the trees sparkled in the sunlight like gold dust, and their towering trunks shimmered with a deep rich green. The contrast was blindingly stunning. There was nothing like this on Earth. These trees even rivaled the height of the Redwood Forest in California by far, just to provide a comparison.

The faeries across the continents of Evanterra grow their dwellings amongst the branches of the forests, and the fae of the Merellien wood seem no different. As I mentioned before, I’ve seen little of fae architecture, mostly in pictures or rumor. The reality was humbling.

“What you do not say speaks volumes.” The Prince smiled, his hands clasped behind his back and his violet eyes beamed with pride.

I chortled. “I suppose I should close my mouth, huh?”

Estelar tossed his head back and laughed. Such a comforting sound on a visceral level.

The lift glided under the canopy of branches and we flew by a network of staircases and platforms making up the various homes and workshops in the trees. Many of the residents waved to the Prince, who nodded regally.

What lay ahead at the center of the forest was a shimmering city of light and flora. Branches and vines braided and twisted to form a massive structure of pure art. Several trees contributed to the base of the capital, like living pillars beneath the intricate system of buildings and arches, city centers and plazas.

As our platform drifted over the metropolis, Merellien subjects filed through the woven streets, going about their business or leisure. We approached the top of the city, to what I assumed was the palace, where the lift nestled to a stop against a wide terrace with a garden.

Estelar stepped off the platform and extended his hand to assist me, though I didn’t need any help. But my fingers melded into his palm and grounded me in this place, with him, and I was grateful for the connection. As such, I hesitated to get to the point of my unexpected but delightful detour. “Forgive me, Your Highness, but why am I here?”

The corner of the Prince’s mouth turned up and he escorted me to a stone bench at the center of the garden. “What did Thalia tell you before you passed through the portal?”

I thought for a moment, recalling her warning. “She said the barrier over my kingdom weakens and my primary objective was to strengthen it by whatever means possible. She also said what I seek is not in Lourean.”

He nodded. “Do you know what magic fuels the ward over Lourean?”

“It’s faerie magic, isn’t it? That’s what my mother told me.”

“That is partially correct.” Estelar paced, his hands clasped behind his tall frame. His long dark-brown hair cascading over his broad shoulders. Hints of his wings shone under the rays of the sun spearing through the canopy. “The ward is actually elven and faerie magic, woven together, created by the blood of your mother and father.”

I frowned. “You speak of Myril as my father? He wasn’t fae.”

I clenched my fists. “Was I the only one who didn’t know?”

“Brindle knows. I’m not sure if Melchor does. That’s why he was sent to Lourean. And Thalia only just discovered when you met her today. She recognized your aura.”

Estelar stopped and lift his tear-filled gaze. “Because I am your true father, my dove.”

Yep, yep, yep! Loving the way this story is coming along. I hope you were a bit surprised and we have a lot more story to cover with Cleris before we go back to Faelar and Mace. I don't know when these two storylines will intersect, but I suspect they eventually will.

I Need Your Help

If you're enjoying this web serial – the Legends of Evanterra – PLEASE share these posts and click the social media buttons below. Thank you!!