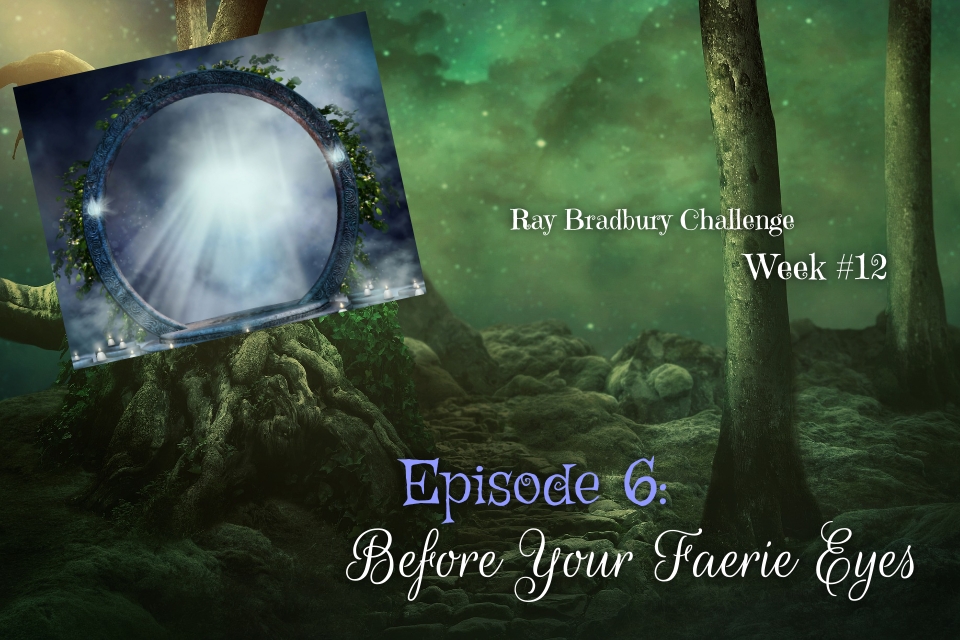 Greetings!! I'm thrilled to still be on track with the Ray Bradbury Challenge, writing a new short story every week for a year. However, I've altered it slightly by creating a web serial from these posts so I can explore the fantasy world of Evanterra, which is my make-believe world my husband and I have been creating for a few years now.

This week's prompt is again from my favorite source: Shauna Philp's Wednesday Writing Prompts. Number 7 on THIS PAGE caught my eye this week…

“You wake up in the bottom of a pit with no recollection of how you got there.”

By the true definition of a writing prompt, it's just supposed to stimulate a story idea, so this week I'm not using that exact quote, but I ran with the essence of the quote.

We're picking up with Cleris where we left off at the end of Week #10 – The Silent Pendant, Episode 4 of Cleris in Evanterra. Be sure to click that link if you'd like to read a refresher.

Before Your Faerie Eyes

Melchor and I approached the faerie cottage nestled in the tangled roots of the ancient ebony tree. As we drew closer, the air cleared and the warm lights glowing from within the cottage radiated a sense of belonging.

A forest faerie emerged and a smile spread across her smooth moss-green face, pinching her eyes almost shut. “The mighty Melchor,” she said in her sugary voice. “’Tis many seasons since we last met. Come inside for tea.” Thalia waved her spindle-like fingers gracefully, her gossamer sleeves fluttering at her gestures.

“I’m afraid we don’t have time for chit chat.” He followed the faerie inside, ducking his head.

Though I didn’t have to duck, my head barely cleared the doorway. The cottage interior was larger than what appeared on the exterior, as were most faerie dwellings…or so I’d heard. I didn’t have much contact with the faeries in their own territory. They usually came to Lourean each decade for council meetings.

Thalia fetched three teacups from her cupboard and placed them on a tray. Steam roiled from the spout of the pot as she brought it to the knee-high table before the hearth.

“There’s always time for tea,” she said, grinning, her purple eyes sparkling with hospitality. “Surely, you journeyed all day to get here. Time to refresh.”

Melchor sighed and crossed his arms.

One thing I did know about faeries—they liked company and they seized any excuse to converse. I sat by the table in the cozy cushioned chair decorated with berries and leaves.

“Now, see? The Princess knows how to be a well-mannered guest.” She poured the blue-tinted brew into a cup and passed it to me. “Blueberry tea with bits of rosemary and basil.” Swirling a spoon in a jar, she said, “Fresh flutterby honey if you like it sweet.”

The faerie lifted her solid purple eyes to me and her smile faltered. “I…I am pleased to meet you, Princess Cleris.” She raised a curious eyebrow as her eyes studied me, seeming to take in my aura, since her gaze skirted my form.

Melchor mentioned during our lunchtime that Thalia was the Matron of the Ebonywood Forest, guardian and protector.

Her grin returned and she waved off my greeting. “Thank you for honoring my title, but Thalia will do.”

“Then you must call me Cleris in turn.” I dribbled the flutterby honey into my cup and stirred it with the spoon she passed to me. When I sipped the tea, energy rippled through my body, erasing the aches and pains of the long walk. “This tea is just what I needed. Thank you.” Damn. Better than Advil.

“Oh, lovely.” She tapped her fingers together in silent applause. “No honey for you, if I recall, Melchor. Yes?” She poured another cup and held it out to the wizard.

He sighed resignedly and sat, taking the proffered refreshment. “Thank you.”

“Fear not.” Thalia stirred quite a lot of honey into her tea. “The portal is ready for travel. And the tea will give you added strength to endure the journey.”

That was a relief to know. I had traveled through a few faerie portals and remembered how draining they could be. Novel idea, being proactive for a portal journey. I had always been reactive, resting up afterward. I eagerly drank the tea, filling my body with vitality.

“Brindle said you were going back to your kingdom.” She shook her head and pouted. “So much has happened in the year you’ve been gone, Princess.”

“I’ll be briefing her once we arrive in Lourean.” Melchor gave the Matron a scolding glance over his cup.

She ignored him, addressing me as if he wasn’t in the room. “The Blood Lord presses his attack, and the barrier weakens. It’s good you have returned. But your presence is not enough, I fear.” She sipped her tea.

I was about to ask why not, when Melchor cleared his throat and scowled. I guessed he didn’t want to say too much in front of the faerie?

I’d finished my cup and leaned forward to put it on the tray.

Thalia refilled it and her eyes fell upon my necklace dangling out of my shirt. “What a beautiful pendant.” She reached for it. “May I?”

Pinching the chain, I held the pendant away from my body for her to examine.

Her slender fingers caressed the caged stone and her eyes flared with interest. “Where did you get this, child?”

“My mother gave it to me when I was very little. She said it would protect me.”

“It’s very beautiful.” She nodded and returned to drinking her tea, her gaze far away.

Melchor set his cup on the tray and rose. “Thank you for the tea, Thalia, but we must be going.”

I quickly finished my second cup and waited for Thalia to pass me before I trailed after her and Melchor. The Matron opened a door beside the hearth, which revealed a staircase, and she proceeded down into the earth of the cottage. I closed the door behind me and followed the wizard and faerie into a chamber formed from the rock, where a decorative stone frame with woven vines dominated the far wall. The space inside the portal swirled with the same lavender, black and silver light I’d seen in the mirror portal I’d stepped through from Earth.

Thalia glided toward the frame, where she faced us. “Who goes first?”

Melchor stepped forward. “I will. I want to be sure it’s safe for Cleris before she arrives.”

She nodded and rested her hand upon the frame. As if responding from her touch, the leaves and branches shuddered and leaned toward the swirling vortex.

Melchor stepped through and vanished.

Thalia held up her palm. “Wait, please. We must give Melchor time.” After a few moments, she rested her hand upon the stone once more and the vortex changed direction.

The Matron grinned. “The portal must be refreshed after each traveler.”

I stepped forward and Thalia placed her palm on my shoulder. “The barrier weakens, Princess. Your primary objective is to strengthen the barrier by whatever means possible. What you seek is not in Lourean.”

“Thank you. I’ll tell Melchor when I arrive.”

Thalia bade me to enter the portal. I stepped through.

The roar of marching footsteps greeted my ears. In moments, purple-skinned warriors surrounded me, spears pointing at my chest.

“Whoa!” I froze and darted my eyes from one angry face to another. They had pointed ears smaller than my elven, and white irises glaring at me. These were the faeries of the Merellien forest.

Melchor was certainly not among them…and I was obviously not in Lourean.

Will You Please Help?

And that is it for this week's episode. If you're enjoying the story, then please share it with your friends and family. Just click the social media buttons below.