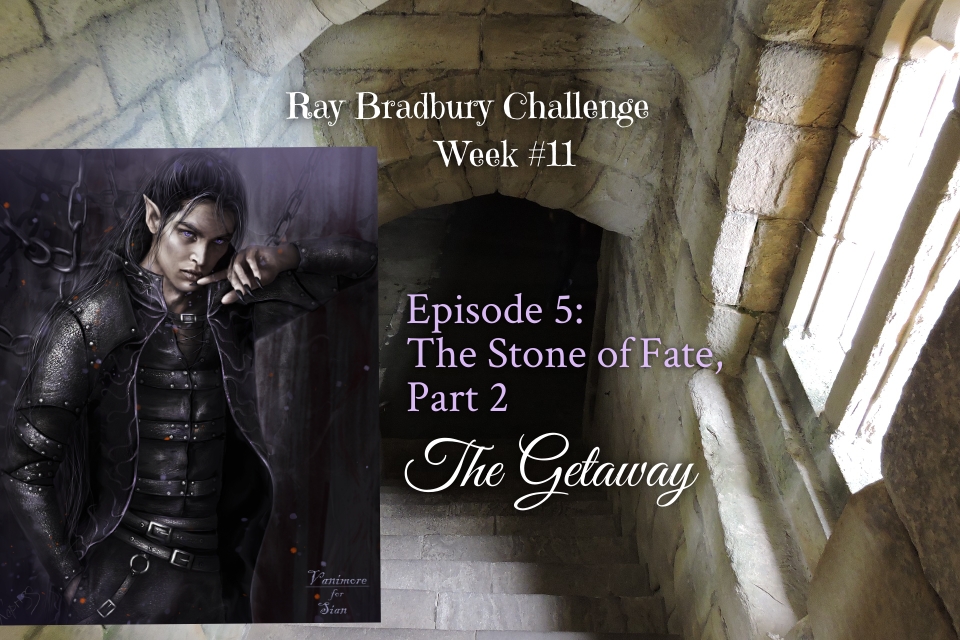 The Ray Bradbury Challenge this week is a short one because I'm on a tight deadline with another couple of stories I'm working on for publication, so forgive the brevity. BUT I think this episode packs a powerful punch.

We're going back to The Stone of Fate storyline, where our elf hero Faelar was “rescued” by a human on a joint mission for the fabled stone. It was brought on by this week's prompt, #16 at Shauna Philp's Wednesday Writing Prompts on THIS PAGE. And here's the prompt that caught my eye…

If you'd like to get caught up on where we left off with Faelar and Mace, CLICK HERE to read A Twist of Fate, Episode 1 of The Stone of Fate. Then come back here to continue the story.

The human, Mace, peered around the corner, his fingers flared behind him as he signaled for Faelar to hold back.

Faelar pressed his back against the wall, cursing under his breath and gripping the dwarven axe to his chest.

“Okay, come on.” Mace moved stealthily down the corridor.

Faelar snuck up beside the human and whispered, “And just where are you taking us?”

Mace glanced at him as if he’d grown tentacles. “Back to the archives, of course.”

“I thought you had the map.”

Mace whirled around. “I do, but we need more than the map.”

Troll’s balls! This human was smarter than he thought, but Faelar wasn’t going to reveal his hand if he didn’t have to. He couldn’t trust this human, who so easily incinerated a dwarf without a second thought. “I don’t understand.”

“Remember the labyrinth we have to navigate to get to the stone?”

“Silveril composed a list of clues to get through the maze.”

“Great. So you’re telling me we have to go back into the very room they’re watching like a gryphon sentinel and they probably know exactly what we’re looking for?”

The human smiled. “Yeah.” He proceeded down the corridor.

He grabbed Mace’s shoulder and held him fast. “That’s suicide.”

Faelar opened his mouth, but Mace held up his finger.

“When are you ever going to get back into this keep? They know who we are. If we try to break in again, we’ll never make it this far. How many guards did you see carry me into the cell?”

“Right. And he’s the only one with whom I made the deal, and now he’s dead. No one knows we’re missing until they change the guard. So if we can get to the archive and wait for the alarm to sound, then we can sneak in while they’re preoccupied with looking for us escaping from the dungeon. They won’t expect us to go deeper into the keep.”

It was a reckless plan, but if the cavalier human was driven to carry it through, that’s all Faelar needed. “Okay, but I think we’re going to get caught.”

“Why are elves so negative? Just follow my lead.”

Faelar pursed his lips. “I don’t like it, but okay.”

He followed Mace into a doorway alcove, barely missing a dwarven guard passing the T-junction ahead. As soon as Mace turned his back to peer down the hall, Faelar whacked the butt of the axe handle to the back of the human’s head. Mace collapsed with a grunt.

Heart racing, Faelar peered through the door, relieved to find a cold storage room. He tossed the axe inside and grabbed Mace’s ankles, tugging him into the room.

The temperature dropped drastically once Faelar closed the door. Frost sparkled on the stone walls, indicating the room had been spelled with an ice enchantment to keep the contents preserved. Meat slabs, skinned and cured, hung from hooks bolted to the ceiling. Barrels of various fruits and vegetables crowded the space.

Faelar sighed, his breath turning into a cloud on the frigid air. He took off the shoe, in which Mace had hidden the map, and peered inside.

He pried up the sole of the shoe. Nothing. He took Mace’s other shoe off and still…nothing. Even searching his clothing rendered no map.

Goblin’s tits! Mace was a mage, so this meant he probably put the map inside a dimensional pocket. If that was so, then the only one who could retrieve the map would be Mace.

Faelar had the List of Silveril’s Labyrinth Clues. He was lucky enough to recover it before the dwarves got the jump on him in the archive, so there was no reason to stay in Birgalor Keep. That’s the hand he didn’t want to reveal to Mace, but it looked like he was going to have to if he wanted Mace to cooperate and share the map.

It seemed he was indeed stuck with the human for the duration of this quest.

He cursed and kicked the frosted stone wall, then inhaled a calming breath.

Picking up Mace and throwing him over his shoulder, he peered out the door and headed toward the exit to freedom.

Woo hoo!! It took a bit of brainstorming to come up with this one. This is the challenge with writing something by the seat of your pants and PUBLISHING IT before I know what's going to happen next. This is definitely an exercise in keeping true to what I've written and dealing with the consequences. LOL

I hope you enjoyed this week's episode! If you did, please visit the social media links below and share. Until next week…