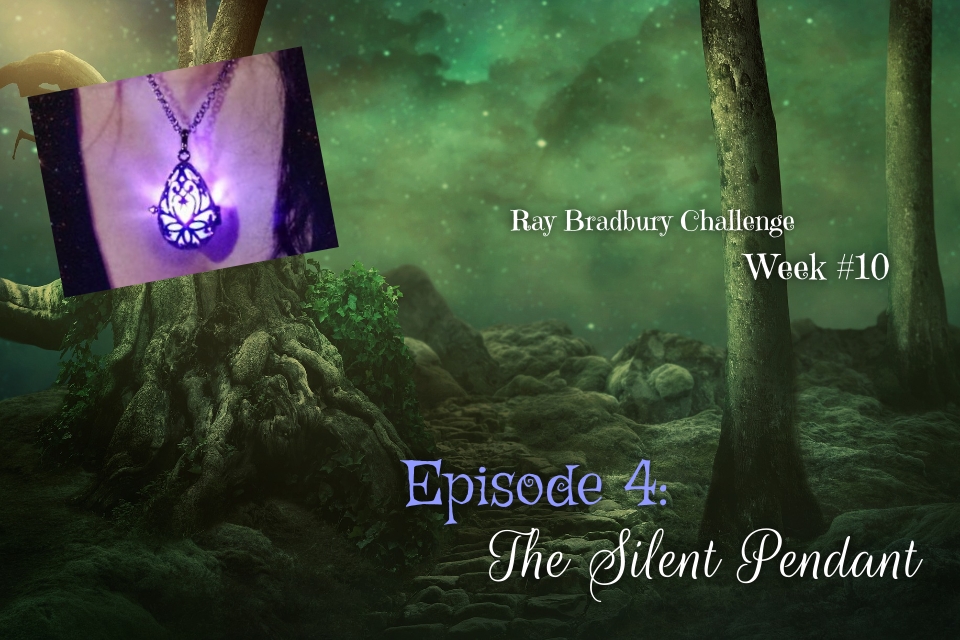 This week is a bit longer than I usually publish, but I believe a little time needed to be spent on world building. If you missed the first few episodes of our web serial, CLICK HERE to go back to Episode #1 of Cleris in Evanterra.

And you might want to make sure you've read A Twist of Fate, Episode #1 of The Stone of Fate storyline, which is also part of Evanterra.

We're at 10/52 posts for the Ray Bradbury Challenge. Only 42 more posts to go! LOL Here's today's prompt, taken from my favorite source – Shauna Philp's Wednesday Writing Prompts. This is #14 on THIS PAGE.

Guilt was eating me alive.

I uselessly tossed and turned all night to dodge it. The stone caged in my pendant flickered like a candle, so that hadn’t helped, either. And though it seemed most of my memories, if not all, had returned, I don’t ever remember the stone glowing.

Dawn pinkened the sky, so I rose and ventured into Brindle’s kitchen.

“Good mornin’, lamb.” The dwarf looked up from the book in front of her on the dining table and smiled. “I have some water boiling for your ablutions.”

Ablutions. An old term one might find in an historical novel on Earth, but part of daily speech here in Evanterra. Earth shadowed me here. What Earth called English, Evanterra called the Common Tongue with subtle differences between the dialects. Evanterra seemed stuck in the Renaissance, using such old terms and antiquated technologies. Evanterra had running water, but no Earth-type appliances, like refrigerators or microwaves. Magic replaced their purposes instead.

But what were the connections between the two…planets? Dimensions? Plains of existence? The faeries were the keepers of portals and travel between such places, so I knew little.

I thanked Brindle and brought the pitcher from the guest room to fill it with the hot water, adding a little cold from the tap to temper it. I washed my face and hands and performed a wipe-down of my body. Simple cottages were usually void of showers. But Brindle had a vanity filled with herbal toiletries, such as body powders and oils, natural and more effective products than anything I’d used on Earth.

When I dressed in my leather armor, I tucked my pendant into my shirt and joined Brindle at the table, where I enjoyed some scrambled eggs, warmed bread and honey butter with tea.

“I’ve packed some provisions for yer journey today.” She pointed to the leather satchel sitting by the front door. “Ye should reach the Ebony Woods just before evenin’.”

I reached for my pendant, and though I meant to mention it, a very strong urge to keep silent held my tongue.

“Somethin’ wrong, lamb?” Brindle eyed my hand at my throat.

Yeah, I’d like to ask you about my pendant, I wanted to say. “Nothing. Just troubled by this whole situation,” I said instead. “You and Melchor can tell me it wasn’t my fault my parents died, but that won’t erase the guilt.”

“As Melchor said, that’s a dragyn ye’ll have to slay yourself.” She patted my hand. “Finish breakin’ yer fast. Melchor’s waitin’ fer ye outside.”

“He’s up already?” I downed the last of my tea and shoved the final bits of egg and bread into my mouth.

“Oh, he’s been up for a couple of hours preparin’ spells and plottin’ the trail ye’ll be takin’.” She wrapped some extra bread and a small crock of honey butter for me, which I placed in the Mary Poppins type satchel of endless magical space. Inside were my other belongings—bedroll, mess kit, waterskin, spare clothes and such.

“Thalia knows yer comin’. I’ve already spoken with her through a mirror.” She pointed to the decorative hand-held mirror faced down on the table.

How had all this activity happened while I was tossing and turning in bed? Perhaps I’d slept more than I thought.

“Mind what Melchor tells ye, Princess. Neither the Ebony Woods nor the faeries should be taken lightly. They’re powerful and unpredictable.”

“Do you trust Thalia?” I shouldered the leather bag.

And that said it all.

I hugged Brindle and she accompanied me out the front door. “Send a message once ye’ve made it to Lourean. I have a few errands to run meself before I join ye and Melchor in the elven city.”

Melchor faced the rising sun, his legs bent and hands gesturing like he was doing some Tai-Chi routine. Except surrounding him were geometric shapes, lines and symbols of the Old Magicka script, shimmering with glitter and light in the air around him.

With a swipe of his hands, he concluded his spell preparations and the magical writings disappeared. He faced us. “Are you ready for a long day of walking?” Although his voice held a note of amusement, his face was severe.

I nodded and he shouldered his own leather satchel.

We said our goodbyes to Brindle, whose eyes were glassy with unshed tears, and I followed the wizard through the forest on a path only he seemed to know.

Evanterra’s countryside was breathtaking and absent of the pollution I hated so much on Earth. Fresh breezes caressed my face, scented by the dense forests painted with the reds and golds of autumn. Rolling hills of rich green grass and brush waved and shuddered with wildlife, flutterbys and other insects. Imagine an English countryside, but with brighter colors.

The perspective I had on the two worlds gave me some insight into the mechanics of Evanterra, now that I had the time to ponder and compare.

Evanterrans were careful to protect their environment, so creation of technologies was subject to strict rules and laws, and was the reason why this world seemed stuck in the Renaissance. Arcane sources fueled gadgets and machines, though. Not fossil fuels, which is why Evanterra was such a clean world. Although greed was a real thing in Evanterra, its focus was different.

My pendant appeared to be a forbidden topic. Every time I opened my mouth to ask about it or show it to Melchor, my body wouldn’t obey my will. After several hours of failing, I gave up. And I certainly didn’t want to talk about my parents. Melchor seemed focused on our destination and watching the terrain around us instead of chatting.

We’d stopped to rest and eat twice along the way. Both meals were consumed in silence, save for the comments regarding where we rested and what we ate.

As the sun hung low in the sky, we veered off the main road across a stretch of grassy hill, where tall black-barked trees stood like a wall at the peak of the rise. The Ebony Woods.

A palpable presence pressed upon me a few feet from the edge of the forest. Melchor walked right through it, while I stayed and studied what I knew had to be a wall of magicka. As the setting sun angled over the crest of the horizon, it shone through the barrier like dust particles swirling in its rays.

The wizard halted and regarded me with a frown. “What’s wrong?”

“Don’t you feel that?” I waved my hand toward the phenomenon. “Can’t you see it?”

“You can?” He stomped closer over the blanket of leaves on the ground.

“Hrmmm. Well, it’s nothing to worry about.” His brows slanted, but he spun on his heel and continued into the forest. “Come along.”

He’s the all-knowing wizard. I picked up my pace to catch up to him.

“Thalia’s cottage is deep in the center of the forest, but it won’t be like finding Brindle’s cottage.” Melchor’s voice was low, as if trying not to attract any unwanted attention.

“Her cottage is hidden. We could literally pass by it or even through it and never know.”

“So is there a kind of sign? A magic spell you need to cast?”

“I’ve already prepared some enchantments that should help me locate the passage into the shroud she has cloaking her home.”

The wizard tilted his torso left, then right, as he walked, as if trying to peer around the trees for signs or evidence of Thalia’s dwelling. The magic particles permeated the air around us, like a light fog, swirling as we passed through them. A haze that didn’t necessarily obstruct my view of the trees and vegetation, but there, nonetheless.

A tingling on the side of my face drew my gaze left. The sensation crawled over my skin as I moved, and now fluttered around my nose and forehead. A twinkling trail of light snaked through the forest, dripping glitter as if Tinkerbell had flown by and left evidence of her flight path. I followed it.

“You’ll never find it going that way,” the wizard admonished.

“I’m following a hunch.” I gripped the strap of my satchel across my chest and proceeded.

I ignored him and pursued the silvery trail.

After several yards, the snake-like glitter cloud stopped…or so I’d thought until I reached what I expected to be the end of it. Instead, the trail had taken a sharp right around an invisible corner into a tunnel. A hallway cut through the magical fog, clear of particles, and ended at a cottage hidden amongst the roots of a giant tree.

Melchor grumbled behind me.

I went two steps right, through the wall of the particle corridor, and the tree remained, but the cottage was camouflaged. I stepped back into the hall and the cottage reappeared. Clever faerie magic.

And that's all I really have time or space for today. This is already 500 words over what I normally like to post. But I hope you enjoyed where the story's going and have more of an idea of what this beautiful world looks like.

If you're enjoying these episodes, please click the social media buttons below to share. The more the merrier!!