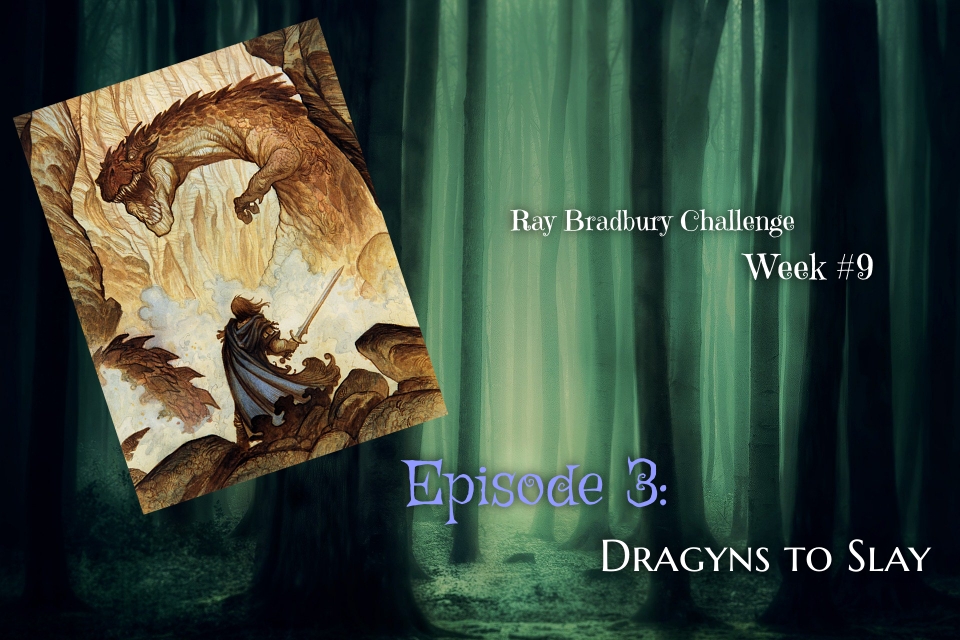 *Arial does the Snoopy dance* We're on week nine of the Ray Bradbury Challenge (9/52). I'm still going strong and still having fun. I hope you enjoy today's webisode of Cleris's adventures in Evanterra. I grabbed another prompt from Shauna Philp's Wednesday Writing Prompts. Here's #18 from the linked page…

“You'll find her in the Garden of Night.”

So last week, Cleris broke the news to Brindle that she betrayed her parents, and that is the reason they were captured by the Blood Lord, Nicolai the Blackheart, vampire king of Mastonia. We pick up right where we left off…

There. I said it. I grimaced, avoiding the inevitable shock and dismay on Brindle’s face.

I lifted my gaze and Brindle stared back with compassion. Compassion.

“Ye can argue wit’ me all ye want.” She threw her hands up and strolled to the stove to fetch the cast-iron pots for the table. “Melchor told me the whole thing, how ye overheard the argument yer parents were havin’, that Myril wasn’t your father. The simple truth is I could hardly blame ye for runnin’ away. Ye were hurt and ye had a right to be, but ye can’t blame yerself.”

“But I allowed Ada to trick me. I let her talk me into meeting my parents outside of the kingdom’s protection.” I wiped my cheeks with my sleeve. “That was stupid!”

The dwarf punched her fists into her broad hips. “But how were you tae know she was working for Nicolai?”

“I should have known better than to trust her. She was an opportunist and I let my emotions get the best of me.” I raked my fingers across my scalp. “If I’d just had the courage to face my parents, I would have been with them when Nicolai’s men attacked and—”

“And ye would’ve been captured with them. Ye were afraid to learn the truth, lass.” Brindle placed a warm hand on my shoulder. “That’s all one can blame ye for. But ye didn’t deliberately set them up to be captured.”

“Enough, Cleris.” Melchor’s deep voice commanded the conversation. “Brindle’s right. That’s why I sent you to Earth and covered your memories. You refused to forgive yourself, no matter what I said, and you had no regard for your own life.”

The wizard took a chair at the dining table across from me and helped himself to the aromatic fare Brindle had set before us.

“That dragyn is one you’ll have to slay on your own, young lady.” He paused, with a pot lid in his hand and a serious scowl leveled in my direction. “But you have a responsibility to your kingdom and their survival depends on you staying alive. I’m taking you back to Lourean under cover of darkness and you’re taking the throne.”

“No, yer takin’ her to see Thalia of Ebonywood on the morrow.” Brindle joined us at the table.

Melchor bristled for a beat before glaring at her. “I don’t need the help of the damned faeries.”

“Oh, so the assassins I saw was just a blemish in me pot, eh?” Brindle had a kinship with the scrying arts.

“Assassins?” I stressed the plural form of the word. “I only killed one.”

“Ye ran into them already? Damia, preserve us.” Brindle touched her hand to each shoulder and kissed her thumb to the sky. She returned Melchor’s glare. “Nicolai knows she’s back in Evanterra. A faerie portal is the fastest and safest way.”

Melchor grumbled, but turned his attention to his meal.

I was numb. I stared at my empty plate, my appetite gone. I’d failed my parents and my kingdom, and these two wanted to put me on the throne. Evanterra wasn’t like Earth. The line of succession was through the mother’s bloodline, so Myril not being my father made no difference.

My heart still hurt that the man I’d called father my whole life wasn’t the man who sired me. Not to mention my mother’s betrayal, and with whom.

But it explained a lot. Father…Myril…could be so cold. We’d always had a love-hate relationship. There were times he showed me what I thought was love. But most of the time I saw contempt. Now I knew why.

Brindle put food on my plate and encouraged me to eat.

I had spent a year on Earth, blissfully ignorant of the disaster I’d left behind. On Earth, I thought I’d just turned twenty-nine. On Evanterra, though, I was ninety-nine—one year away from my Coming of Age. With my parents gone, I would have my coronation before my debut ball.

But that was backwards.

I wasn’t supposed to be coronated for at least a few centuries. My parents were supposed to live to a ripe old age into their nineth century. Gone was the time to be groomed for the throne, learn the affairs of the state and the politics and…

“Where is Thalia of Ebonywood?” My voice was so flat.

“Ye’ll find her in the Garden o’ Night.” Brindle placed her hand upon mine, but regarded Melchor. “Cast yer wards over this house tonight, wizard. Stay here and set out at sunrise. The forest is too dangerous at night, especially the Ebony Woods.”

Melchor worried the food in his mouth before he nodded with a frown. “All right, woman. But the fae always have a price.” He slapped his napkin onto the table and stood. “And you never know their price until you ask the favor.” The wizard grabbed his staff and slammed the door behind him as he exited the cottage.

Brindle cleared the table, insisting I go to the guest room and make myself comfortable. I stripped and donned the nightdress from the wardrobe. She kissed my cheeks and tucked me into bed, like she used to do when I was young.

I stared at the ceiling, thumbing the stone pendant around my neck, a gift my parents gave me when I turned five. And the word parents just didn’t have the same meaning anymore.

Turning on my side, I set the pendant on the pillow, gazing at the gem. Sleep seduced my lids to close, but before I succumbed to slumber, the stone glowed and pulsed…or maybe it just seemed to under the magic of the two moons.

And there we have it for this week's webisode! I hope you enjoyed the way this story is unraveling. I'm looking forward to what these characters reveal each week. Woo hoo!

Would You Please Help?

If you're enjoying the stories, PLEASE use the social media buttons below and share them with your family and friends. Thank you!! And if you're new to my blog, be sure to join my VIP Club to get notified of these stories each week.

Until next week! That's my two pence…